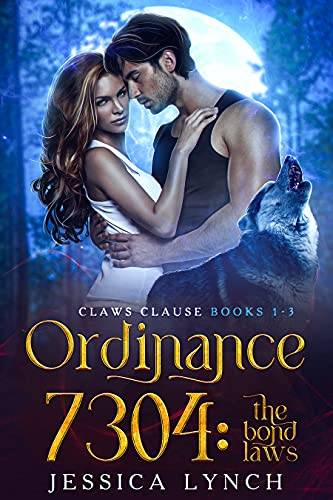 In a world where paranormals live side by side with humans, everybody knows about Ordinance 7304: the Bond Laws. Or, as the Paras snidely whisper to each other, the Claws Clause—a long and detailed set of laws that bonded couples must obey if they want their union to be recognized. Because it wasn’t already damn near impossible to find a fated mate in the first place. Now the government just has to get involved…Ordinance 7304 is a collection that features the first three full-length novels in the Claws Clause series:Hungry Like a Wolf (Claws Clause #1) Maddox Wolfe & Evangeline Lewis
Alpha wolf Maddox believes he has lost his human mate forever — and in his world, that’s a fate close to death. But when he discovers that Evangeline is still alive, he’ll fight tooth and claw to make her remember their love…Season of the Witch (Claws Clause #2) Colton Wolfe & Shea Moonshadow
Colton Wolfe doesn't like witches. When he discovers one is his fated mate, he convinces her to use her magic to sever their bond. Shea Moonshadow will do anything for the shifter that holds her heart, even let him break it. But before she can, a group of murderous vampires comes to town. Their leader wants Shea... and, Colt realizes, so does he.Sunglasses at Night (Claws Clause #3) Adam Wright & Tabby Winslow
After changing from human to vampire, ex-cop Adam has one thought on his mind: revenge on the vamp who turned him. And then he meets Tabby, a perky blonde slayer who is the key to everything he's ever wanted and, suddenly, he's looking forward to forever.This collection is only the beginning of the Claws Clause series! After you finish it, you can continue with: