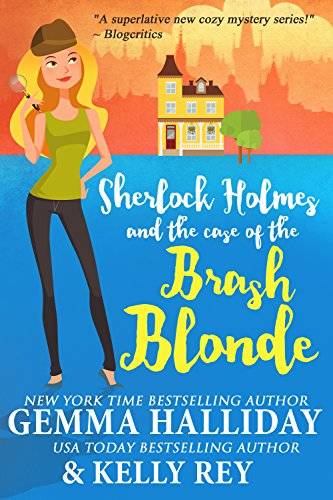 Martha "Marty" Hudson has it all...almost. While her best friend, Irene Adler, is a dot-com millionaire many times over, Marty's days are filled with working as a barista at a Stanford University coffee bar, crashing various courses and lectures, and dodging the rent collector at her crummy apartment. But when Marty suddenly finds out that a long-lost aunt has left her a Victorian home at 221 Baker Street in the heart of San Francisco, she's hopeful her luck is about to turn around! Okay, so the Victorian is run down and probably in need of more repairs than Marty could ever afford, but at least it's a link to family. However when Marty starts sifting through the contents of the dilapidated home, she realizes her aunt's death may not have been natural...and might have been a case of murder! Taking her suspicions to the grumpy Detective Lastrade and the uber-hot medical examiner, Dr. John Watson, only gets her a pair of doors slammed in her face. But Marty and Irene don't give up that easily. Instead, they invent fictitious private investigator, Sherlock Holmes, to open those doors for them! Between Marty's eclectic class-crashing knowledge and Irene's tech know-how, "Sherlock Holmes" investigates an over-the-hill yoga teacher, mob shops in Chinatown, pot dispensaries in the East Bay, and a slew of suspicious characters. But when the killer returns—this time with Marty in sight!—even the great Holmes may not be able to save her...at least not without a little help from the girls.

*Winner of the 2017 RONE Award for Best Mystery*

What critics are saying:

"One of the most anticipated of the fall releases happens to be one of THE BEST of the fall releases! Halliday and Rey have joined forces to create a SUPERLATIVE new cozy mystery series that will leave readers clamoring for more."
~ Diane Morasco, Blogcritics Reviews

"Move Over Sherlock...Marty is Here! I am a fan of Gemma Halliday and Kelly Rey as individual authors, but teaming them together has been delightful experience!"
~ Kings River Life Magazine

Rating: This story does not contain any graphic violence, language, or sexual encounters. Its rating would be similar to PG-13 or what you would find on a Hallmark Channel movie or TV series.
Private Investigator Mysteries Mystery Series Women's Detective Fiction

A Little SPOT of Empathy: A Story about Understanding and Kindness

Come Home to Me