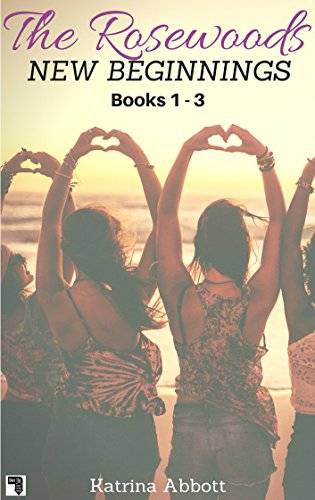 Books 1 - 3 in The Rosewoods Series - an exciting series for readers who love fun, flirty love stories.

TAKING THE REINS (Book 1)
Brooklyn Prescott (if that’s even her real name) is the new girl at The Rosewood Academy for Academic Excellence, now that she’s moved back to the States after two years living in London. Rosewood, a boarding school for children of the rich and famous and known for its celebutantes, is missing just one element important to any junior’s education: boys. But luckily for Brooklyn, and the rest of the Rosewood girls, there’s a boys’ boarding school, The Westwood Academy, just a few miles away.

On her very first day, Brooklyn meets Will, a gorgeous and flirty boy on campus to help with move in. But is he who she thinks he is? And what about Brady, the cute stable boy? Or Jared, the former child actor with his grown-up good looks who can always make her laugh? As Brooklyn settles in at Rosewood, she’s faced with new friends, new challenges and new opportunities to make herself into the girl she always wanted to be. Whoever that might be.

MASQUERADE (Book 2)
Halloween is coming and everyone knows what that means: costume party! For Brooklyn Prescott, the best thing about being the new school liaison was supposed to be planning the Halloween dance. Who doesn't want to escape herself, even if it's just for one night? But The Rosewood School for Academic Excellence has banned costumes and now Brooklyn's faced with the possibility of her first event being a total flop. Not to mention that she's planning the dance with Dave, the sexy and neglected boyfriend of her roommate, Emmie. Awkward!
It's not like planning the dance is her only concern either. On top of classes she's got equestrian team practice, and Coach Fleming has been acting very oddly. Talked into sneaking out to collect some intel with her friends, Brooklyn may have stumbled onto a huge, juicy secret that could involve the coach in a potentially career-ending scandal. And then there's Jared, who seemed to be into her, but has suddenly disappeared without a trace - not even a text message.
Things at Rosewood are getting complicated for Brooklyn, just as she's starting to fit in. The more she tries to uncover the secrets surrounding her, the more she realizes that her friends and even the faculty are all wearing masks. Does she dare look underneath them? Or does she put on one of her own?

PLAYING THE PART (Book 3)
Kaylee Bennett has never felt like she really fit in at The Rosewood Academy for Academic Excellence, but this year she feels even more like an outsider. Life has done a one-eighty for Kaylee and as she returns to the posh school for girls, she can’t bring herself to tell her secret to her friends and definitely not her long term crush, Phillip Carson. Not that Kaylee could ever imagine he would be attracted to a quiet bookworm like her anyway. But then there’s Declan Ryan, the gorgeous exchange student who seems to be interested, until Kaylee finds out his secret and why he might actually be into her, and it has nothing to do with her charm or love of English literature.

To complicate matters, Kaylee gets stuck running the school’s production of Romeo and Juliet, directing both Declan and Phillip with the help of Rosewood’s sexy first year teacher, Mr. Stratton—as if the Westwood boys weren’t enough of a distraction!
Determined to stay away from Declan and make things work with Phillip, Kaylee isolates herself from her friends and hides out in the house of cards she’s built to protect herself, but how long will it stay standing?

Big Man's Happily Ever After Boxset