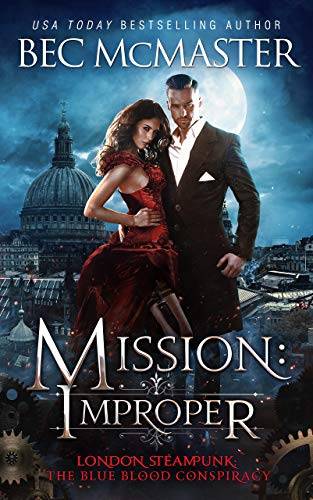 A thrilling twist on the enemies to lovers’ theme—a deliciously dark vampire romance with a unique steampunk infusion.

He promised her vengeance. She threatened to steal his heart instead….

Caleb Byrnes works best alone. The cold and brooding blue blood is the best tracker the Guild of Nighthawks has, and he rules the craving within him with an iron hand. Nobody escapes him. Nobody gets the better of him. And nobody has ever come close to unleashing the hunger within him.

Ingrid Miller is the one who got away.

The one woman who makes him burn, and threatens all his hard-won control.

The passionate and fiery verwulfen bounty hunter once worked a case with him—and left him tied to his bed. Naked.

When they’re partnered together on a new case, Byrnes finally sees his chance to have his revenge. He will have her in his bed and he will ruin her with his kiss, and vengeance will be so, so sweet.

Vampires once ruled London—but after a bloodthirsty revolution left the human queen on the throne, the city has been negotiating a new peace. Rumors of a plot against the queen beckon, and Byrnes and Ingrid must go undercover among the blue blood elite in order to discover the truth.

And when their hunt uncovers a dangerous conspiracy, Byrnes must unleash the darkness within him if he’s to have any chance of protecting the woman his vampiric half wants to claim….

Mission: Improper is the first book in the spin-off to Bec's award-winning London Steampunk series. If you're searching for a vampire romance with a sexy twist, an enemies-to-lovers pairing, and plenty of action-adventure, then you’ll love sharing the journey with Byrnes and Ingrid!

Don’t miss any of the London Steampunk: The Blue Blood Conspiracy books!

Book 1: Mission: Improper.
Book 2: The Mech Who Loved Me.
Book 3: You Only Love Twice.
Book 4: To Catch A Rogue
Book 5: Dukes Are Forever
Book 6: From London, With Love

What everyone is saying about Bec McMaster:

Mission: Improper kicks off the London Steampunk: The Blue Blood Conspiracy series. Three years after the revolution put the human Queen on the throne and upended the Echelon, things aren’t as perfect as they seem. While humans, mechs, verwulfen now have freedom from the tyranny of the Echelon, there are those who wish to undermine the peace. Enter the Company of Rogues, as they refer to themselves, a group of spies, scientists, and fighters working to uncover plots against the Queen that threaten to send London into chaos.

Mission: Improper is our introduction to the COR and sets up this new series perfectly. Our main characters are two character who should be very familiar to readers of the London Steampunk series. First, we have Ingrid Miller, a verwulfen who was Rosa’s right hand woman and member of the humanist movement who you may remember from Heart of Iron and My Lady Quicksilver. Then we have Caleb Byrnes, a member of the Nighthawks who you may remember from My Lady Quicksilver and Forged by Desire.

Both Ingrid and Byrnes are expert tracker and investigators. They also have a shared history between them before they join the Rogues – on a hunt a few years back Byrnes lost a bet on tracking a vampire and ended up tied up in bed naked by Ingrid only to be left there and found by his fellow Nighthawks. When they’re brought together by the Duke of Malloryn (another familiar face) to investigate the disappearance of whole neighborhoods and parties without a trace, they cannot help but butt heads.

I have to say, I loved the banter between the two of them – they both can dish it out. It helps add to the sexual tension between them that is so thick you can cut it with a knife.The romance in this book is top-notch. I literally could not wait for Byrnes and Ingrid to both admit they both wanted to jump each others bones and act on it. It was so satisfying to watch them progress from healthy rivals to something more.

I’m also shocked at how much I liked Byrnes. He’s really grew on me over the course of this book as I wasn’t sure I was going to like him based on what we saw of him in early books. He surprisingly has become one of my favorite characters in the series and seems always ready with a sarcastic comment or quip. Ingrid feels like the perfect match for him as she can keep up with him both in terms of personality and physically. I love that she’s no damsel in distress and can take care of herself and those she cares about. It was so fun watching them work together.

One thing I love about McMaster’s writing is how she’s able to weave a top notch romance into a novel with an amazing, top-notch plot. You get sexy, fulfilling romances plus these great mysteries with compelling twists and turns and characters that jump off the page. What more can you want in a book?

I loved that the new series seems to focus on the mystery of the dhampir, a project that came to light in Of Silk and Steam with the reveal of the affliction of the Duke of Caine. We learn a lot more about them in this book and also see the beginnings of a much larger plot that is going to carry the rest of the series to upset the peace. The mystery in this one kept me on the edge of my toes – I literally had no idea what was going to happen next and I loved every minute of it.

I also have to say, I love the Rogues so much and cannot wait to dive into the rest of their stories. Some of them are familiar faces, like Charlie and Kincaid, so it will be so excited to get to spend more time with them and get to know them. Another thing I love about the Rogues and this series is I get Ocean’s 8 vibes from it even though they’re not stealing anything – I think it’s more the fact of bringing together an unexpected crew with different strengths that are perfect for the task at hand.

Mission: Improper hooked me from page one and I cannot wait to see where this series goes next. I loved the original London Steampunk series and feel this has the makings to be even better in terms of romance, story and expanding on the world. I cannot wait to see how everything plays out.

I really enjoyed this entire series, the characters were amazing the overall plot arch and world was well thought out and the romance was steamy. Highly recommend.

Bec McMaster has a way of building worlds that are believable and it pulls the reader in. In the mix we find some delightful characters, Ingrid and Byrnes, an excellent example in this book, who are strong, brave and passionate. There is plenty of heat along with an exciting plot and a nice pace to take us to the end of the novel. A reader is never disappointed. Looking forward to the next in the series.

OK, but is actually part of a series

Although a stand-alone spin-off, as explained in some other reviews posted, you can read this as long as you are okay with the fact that everybody - EVERYBODY - has a past history with somebody else.

I agree it's more a 2.5, but I'll round it up as the characters are vivid and well-described, even the side characters. A lot of authors are incapable of doing this, and I actually liked several of them a lot more than the H/h. YMMV.

She did it again. One of my favorite authors just gave me another 5* read. I felt hangover from how good this book was. I LOVED the banters between Byrnes and Ingrid. The sparks, the chemistry, THE SENSUAL TENSION!! I felt like I was hanging on the edge of my seat and consumed the words that they exchanged!! It was smart, witty, sexy, and judging by the status updates that I had, this book just owned me.

Meh. This turns out to be a very romancey romance about a special
team put together to solve an important mystery in steampunk London.
The Blue Bloods (those infected with incipient vampirism, basically)
have recently been cast down as England's ruling class and not all
of them are happy about it. Two of the team members have had
romantic sparks in the past and when they meet again, it is at the
point of obsession, completely outweighing the actual mystery. To
make matters worse, they don't solve the mystery in this book, but
*do* flash forward to this couple's HEA (with kid) while everybody
reminisces about how mysterious that mystery was without ever saying
anything more specific. Next book it's apparently back to the
present and another couple within the team has a romance and
presumably a flash forward to *their* HEA and reminiscing about how
mysterious that mystery was.

I loved the Steampunk London series, so I was thrilled to see this spin off, with familiar characters. This has a bit more of an "intrigue" feel to it. Looking forward to the next one!

Claimed by the Warrior