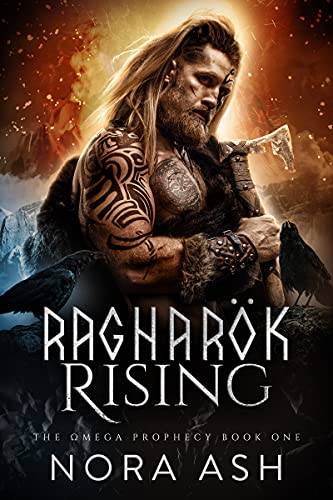 Five possessive gods and the end of mankind. That's my fate.
I always thought the end of the world was a myth. But then, I also thought Norse gods were make believe too. They’re not. Five of them are coming for me. They claim I will only survive if I surrender to them, body and soul. But they don’t realize it’s about so much more than carnal servitude. I am so much more than they could ever suspect. So much more than even I knew. I am the only one who can stop Ragnarök from covering the world in ice and darkness. The only one who can save gods and men alike from annihilation. And in the shadows lurks betrayal so deep it will change the fate of the world...For fans of Marata Eros’ 'The Druid' series and Patricia Brigg’s 'Alpha and Omega' series comes a steamy take on Norse mythology. Omegaverse filled to the brim with wicked alphas, magic and fated mates.
Paranormal & Urban Fantasy Fairy Tale Fantasy Mythology & Folk Tales

Interesting premise of Norse gods mixed with Ash’s own magic world. A fun, quick, spicy read—will definitely be picking up the sequel!

I wanted to like this book. It's steeped in Norse mythology and very well-written. What I can't get past, though, is that the heroine straight up says no and the men keep going. That's not dubcon, that's just rape. The heroine even calls the men on it and they gaslight her. There's character development and they get a little better, but I just can't get over how terrible the setup is.

The book is one of the best I've read recently. Beautifully written.

I just need a part 2 now

Awesome a wonderful read could not put down once I started to read. Enjoyed reading about Norse mythology which was brilliantly intertwined with the storyline. Looking forward to reading the next book in the series.

This book is amazing! Can't wait for book 2!

Omg, this is the best book by Nora Ash I've read. I can't wait for the rest!! It's got everything, steam, action, gods, omegaverse. I mean what else could you ask for? Huge cliffy though.

Ragnarök Rising is one of the most unique stories I've read in quite some time. It has *very* dark moments that may be triggers to some, but I thoroughly enjoyed it as a whole. I can't wait to see what Nora Ash conjures up for the sequel!

Ragnarok Rising is a great blend of Norse mythology and the Alpha/Omega world.

Annabel believes she's a Beta in the Alpha/Omega world. She's been free to live her life, which includes pursuing her passion for history. When she finally gives into her parents to family friends, she's determined to make the most of it by researching Norse mythology for her thesis. What she couldn't have planned for was staying with 3 Alphas, which finally trigger her first Omega heat.

But these are not just your average Alphas. They're Norse demi gods, determined to unlock a prophecy to save their family lines from Ragnarok. As the end of the world starts, things get even more complicated.

As the sons of Thor and Loki compete to secure their family lines to survive the end of the world, Annabel struggles to find the power to stop Ragnarok completely. She's determined to be more than just a means to an end. The question that Ash leaves us with is will she find a way to harness her power as an Omega to save the world?

The Iron Horse: A Faraday Novel