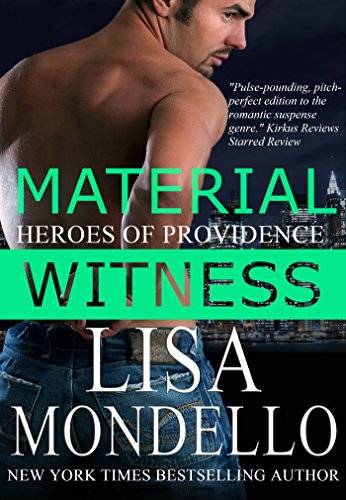 BOOK 1 of the Heroes of Providence series.

Who does she trust when the horror of one of her crime novels turns into a deadly reality?

Bestselling crime novelist, Cassie Alvarez, aka Cassie Lang, had murder on her mind when she walked into Rory's Bar under dressed and under cover to research her latest crime novel. Researching the cool, blue-eyed and dashingly handsome man at the end of the bar stirred her senses more than she wanted to admit. But was this man of leather armor all he appeared to be?

Playing White Knight to an innocent wasn't how Detective Jake Santos planned to spend his time under cover. But there was no way "CJ" was what she claimed to be and that nagging tightness in Jake's chest told him he'd better take her home to safety and leave it at that. Then the barroom exploded with gunfire, leaving a trail of dead that includes a notorious Providence organized crime boss and an undercover FBI agent. When Cassie's name is leaked to the media as the only witness to the grisly murders, Cassie insists she only trusts Jake to protect her.

The FBI wants their star witness happy and will do anything to make sure Cassie testifies. But someone wants vigilante justice and it is clear to Jake that the shooter isn't the only person who wants Cassie dead. Not knowing who to trust, he vows to protect Cassie at all cost despite the fact that guarding the beautiful novelist is a serious distraction.

More books by Lisa Mondello Contemporary Romance Novels:
TEXAS HEARTS:
Her Heart for the Asking
His Heart for the Trusting
The More I See
Gypsy Hearts
Leaving Liberty
His Texas Heart
The Wedding Dress
Lone Star Lady
Under a Texas Star

FATE with a HELPING HAND:
All I Want for Christmas is You
The Marriage Contract
The Knight and Maggie's Baby
My Lucky Charm
The Gift

Return to Halfpoint: A closed door, enemies to lovers, later in life romance