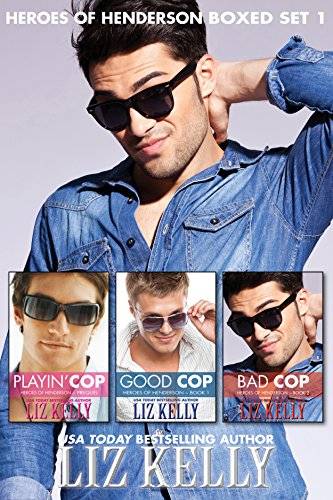 The first three installments of the fun and sexy Heroes of Henderson Series by USA Today Bestselling author Liz Kelly.

Three swoon-worthy Southern boys face turning thirty and realize it's high time to get serious about love and life.

In Playin' Cop, Duncan James bets his old frat buddies--turned small-town cops--he can do what they can't. Give the sassy local speed demon a ticket. But when he's confronted with a red-headed Southern belle out to win a bet of her own, his heart gets tangled up in the outcome.

In Good Cop, Duncan's cop buddies Brooks and Vance realize they have a reputation problem. When it comes to romance, their good cop-bad cop images have them handcuffed. They want a woman's point of view to help unshackle their reputations and they've picked out a pretty, pony-tailed firecracker to do it. Lolly DuVal's coming off a nice, safe, boring relationship so she eagerly agrees to tutor Henderson's hunkiest heroes on what women really want. But soon she realizes she's in way over her head, caught between two cops and a hard place.

In Bad Cop, our reformed bad boy tracks down the little blonde he can't forget. The one who saved his life back in fourth grade. Even though part of her is still the same sweet Piper he remembers, the rest of her is the Lawyer Beaumont--a defense attorney with a searing pet peeve against cops.

"The Heroes of Henderson series is laugh-out-loud fun with a whole lot of steamy truck windows. Definitely Southern lovin' at it's best."

All the books in the Heroes of Henderson Series are complete romances. They do not need to be read in order, but it might be more fun that way as characters continue to show up in Henderson in big ways and small.

This thing needs an editor - STAT!

If you don't believe me, just read the Look Inside feature and see for yourself. It's hard to find the dialog when it's been buried. While the spelling is fine, the grammar mistakes (ie: commas) makes one read and re-read to understand just WTH the author is trying to say.

Love me some Liz Kelly!

I loved these books

I loved these books. Liz Kelly is a new author for me. I don't know why I haven't found her before, but I'll remember her name now.

Loved the story line and the romance. Great home town story of an area I loved living near. Great job.

The book was written about how two friends who were very close and how much they were alike in so many ways including there love life.very interesting reading

I LOVE THOR and his big red truck!!!!

What??? $0.99 for the boxed set? I may buy it even though I have all the books. You NEED to start this series. Each book is stand alone; however, you WILL HAVE a better experience reading each book in the entire series. Liz Kelly's characters show up in all of the books to enhance the feeling of an extended family in a small town. You will be drawn to Henderson; I have been scouting the map for a piece of property to build a house (Ha). I read for pleasure, escape from long days, and fun. I have found absolute treasure in the Heros of Henderson book series. Her books are both witty and funny with a hero and romance. If you like to interact with the author and other readers, Liz Kelly is accessible through her website and facebook. After reading a few of the books, you inevitabily will have a favorite HERO. Share him with the rest of us. I like every hero the best when I am reading his story. Ultimately, I LOVE THOR (Book #5) and his big red truck!!!

Makes me want to live down south...

Absolutely love the heroes of Henderson! Liz Kelly has created a rollicking world, complete with witty banter, snappy retorts, a magical bartender, and plenty of heat. Ready for the next installment. Bring it on.

The City on the Sea

Etiquette with the Devil