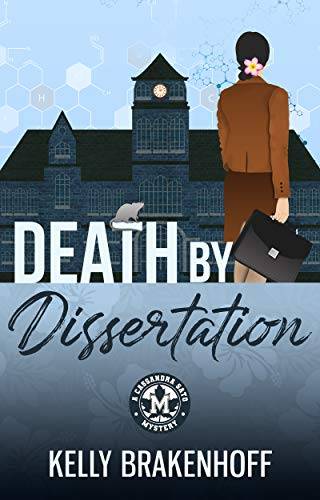 Goodbye Hawai'i, hello dream job . . . in Nebraska??
Ambitious Cassandra Sato traded her life in Hawai'i for a dream position at Morton College in rural Nebraska. She expected the Midwestern church casseroles, land-locked cornfields, and face-freezing winters would be her biggest challenges, but it's her job that's rapidly becoming a nightmare.

A deaf student is dead and the investigation reveals a complicated trail of connections between campus food service, a local farmer's beef, and the science lab's cancer research. Dealing with homesickness, vandalism, and a stalker, Cassandra is trapped in a public relations disaster that could cost her job, or more. No one said college was easy.

If you like academic cozy mysteries with funny BFFs, hilarious student shenanigans, and small town drama, you'll like this series.  Get it now!
Cozy Mystery Mystery Series Medical Thrillers

That’s a good thing! Learn the background, meet the characters, and then figure out the crime and the perpetrators. Likeable characters are well-developed, and the reader is left with a solid feel for the people and the place.

Casandra moved to Nebraska from Hawaii where she was born and raised. She expected culture shock to only occur from the weather. She had worked in Administration in charge of students and discipline before. That would have been easy.

Deaf students who start investigating, her house broken into. Who’s the one trying to stop people and eliminate them if needed? And why?

I really enjoyed this book even though there were a few jarring errors. For example she put on flats while getting dressed but on the next page they were 3" heels. Overall though this is a nice little book. Give it a go if you are looking g for a cool little mystery.

Promising series but needs some development

I love academic mysteries, and of course the mention of Hawaii made me think of Frankie Bow's Professor Molly series, an ongoing favorite. This one was not as fun as the Prof. Molly books, though. I have two main issues--Cassandra herself comes off as humorless and judgmental. She is the kind of person I would avoid in my own workplace. Hopefully she will lighten up as the series goes on. Second, the pace is very slow for a modern mystery. I skipped long sections where nothing much was happening. Lighten & tighten and this series will be good. I did in fact purchase the next book in the series, so we'll see how it goes.

First, this is a good mystery set on a college campus. Second, it's different because the heroine is from Hawaii, and you get quite a bit of culture, mostly what she misses, and some slang as she visits with a friend from there. And third, it's a deaf student who dies (and one who was his friend), and some elements of being deaf in a majority hearing situation are mentioned, which I found interesting. Recommended!

There were many things I enjoyed about this book. I read it because it was in an area where I was born and raised, and where I also went to college. I also worked in higher education for awhile, and in services for students with disabilities so I’m somewhat familiar with the challenges those students face. Cassandra was a very interesting character, reaching such a high administrative position at such a young age. And her cultural adaptation to the Nebraska prairie from her Hawaiian roots was something I could identify with. I remember how I felt (like her friend Meg) the first time I visited Hawaii about how the vastness of the ocean was like the vastness of the farmland. This story also touches on the common academic and private corporate conflicts that too often can occur when it comes to dealing w other research dollars, especially in the US where corporate dollars can far outweigh a professor’s or even administrator’s salary. I look forward to reading Book 2 of this series. I gave this 4 out of 5 stars only because of the snarky comments about yoga pants.

A warm and likable heroine

I won this book in a Fall Back to School Giveaway.
I was pulled into the story almost immediately with the main character being Cassandra Sato who has moved from Hawaii to Nebraska for a college VP position. She experiences racism in a small town while still giving herself fully to her students and friends. Midway into the book, we find out she has had a lot of personal pain in her life, but she still manages to be a warm, likable person. I also liked the inclusion of American Sign Language in the book as a couple of deaf students play large roles in this mystery as well.

Death by Dissertation is the first book in the Cassandra Sato series written by Kelly Brakenhoff. It was published in 2019, and since this is a relatively new series with only a couple of books published to date, you can jump in early to experience this great collection. I love that it's set on a college campus and brings some much needed diversity to the sub-genre. The main character is from Hawaii but moved to Nebraska a few months ago, and she comes from Japanese ancestry.

Cassandra is in her late twenties, and after finishing up three degrees in Hawaii, she took a job working for the president of a college in Nebraska. He often tells her he selected her specifically because she was a different ethnicity and wanted to bring something new to campus. That tells us a lot about him, especially the way he drops a few odd lines and somewhat offensive sayings around her. Luckily, he is off on a trip to China, and Cassandra has a chance to run parts of the college while he's gone. Then a student dies. It appears like an accident, but of course, it isn't. Someone pushed him down the stairs. Adding to the drama and curious sub-plot, the student is deaf and had a deaf roommate. I am impressed with how well this piece of the story is integrated into the overall book.

Brakenhoff uses lots of ASL (sign language) and translators to help the dead student's roommate communicate what happened in the preceding days, especially when the local police bumble the investigation from the beginning. Throw in some very intriguing science experiments, blood plasma transfusions, financial donations, caged rats, and a strange preacher who yells a lot... this was quite baffling -- all in a good way. Readers have to pay close attention to the details to understand all that's going on. We also see Cassandra's romantic interests begin to develop as there are two or three suitors, all who seem like a good fit. Her mother will be very excited to meet them... I can't wait 'til she comes for a visit. That will bring a lot of levity!

The supporting cast is well-rounded; she has a friend who went to school in Hawaii but lives in the Nebraska area, grounding Cassandra. She's well liked at the college, though a few people dislike her very detailed approach to solving the crime. The best part - she brings out her culture / amazing attitude to kick-start a difficult student into waking up from his delusions. Though I only understood 50% of what she was saying, the writing style makes the words and emotions come across quite easily. I loved feeling a bit of Hawaii again (haven't been there in years... but stayed for two two-weeks trips, and I enjoyed it).

This is the beginning of a well-written and very promising series. Cassandra is extremely likable. I think the college setting will be very strong. I think a certain character in another book I know well might need to meet Ms. Sato at a college conference one day in the future. If you're looking for an academic setting with a nice balance of culture and side stories, this will be a great series to start. I'll be reading book two before the end of the year. Can't wait!

Tempest in the Tea Leaves