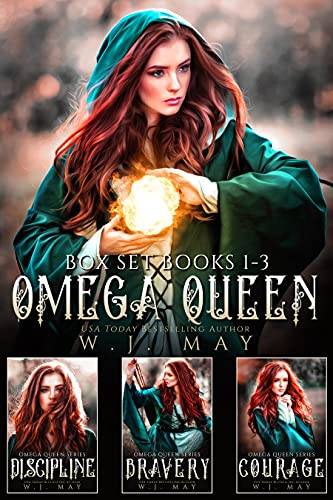 Be prepared to fight, it's the only option.

BOOK 1 - DISCIPLINE
Not every fairytale has a happily ever after…
For the first time in hundreds of years, the five kingdoms were at peace. United by the band of young heroes who'd won the Great War, the realm had entered a time of wealth and prosperity unlike anything it had known before. New families. New Beginnings. Old alliances were on the mend.
But such a thing can never last.
When Katerina and Dylan's teenage daughter finds herself at the center of a strange prediction, she and her friends are swept away on a wild adventure that may very well claim all of their lives. Old evils are lurking the shadows. A secret new darkness is waiting to take hold.
Can the new band of heroes stop it in time?
Or has their happily ever after finally come to an end?

BOOK 2 - BRAVERY
How long can you outrun your fate?
When Evie and her friends set out to fulfill a long-awaited prophecy, they never thought their adventure would turn into a nightmare before their very eyes.
Trapped in a cavern beneath the ground, they find themselves going up against a creature so twisted and terrible, they wouldn't have believed it was real. Their strength is tested and friendships are strained. But as they soon discover, the creature was the least of their problems.
The world is shifting. Shadows and darkness are entering the land. Rumors are whispering around the remaining kingdoms. Rumors of a dark and powerful stone.
Can the friends find it in time? Or are some prophecies never meant to be?

BOOK 3 - COURAGE
How time flies…
When Evie and her friends find themselves trapped in the sorcerer's cave, they think all is lost. But rescue comes from the most unlikely of people. And with it comes the most terrible truth.
With the five kingdoms divided and the realm on the verge of collapse, the prophecy is more urgent than ever. But the road is treacherous and the friends are on the other side of the realm. New alliances must be forged and friendships are tested as they set off to fulfill their destiny, only to find that the fates may have something different in store.
Is it possible to pick up the pieces and start again? Can the friends get to the Dunes and find the missing stone in time?
More importantly…
…are some sins too terrible to forgive?

Be careful who you trust.
Even the devil was once an angel.

Fall of the Green Land