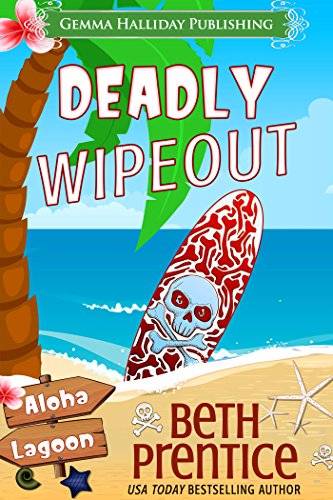 From USA Today bestselling author Beth Prentice comes an Aloha Lagoon mystery that will leave you gasping for more...

Samantha Reynolds had hoped that moving to the resort town of Aloha Lagoon would be the start of an exciting new life. Sure it may not be everything she had hoped for—she's living with her mom, has no job, no income, and absolutely no idea what to do next. But it's a start! Out of options, Samantha decides to take a job she's just a little under-qualified for—a children's surfing instructor at the Aloha Lagoon Resort. She can surf...she just doesn't know how to teach surfing. But that soon becomes the least of her worries.

Throw in two dead bodies, two unexpected inheritances, and one hot bartender, and the heat in Aloha Lagoon has quickly turned up! Samantha just needs to figure out why her family is involved, control a group of preadolescent kids, keep her mom and brother out of jail, and get the hot bartender to notice her. It couldn't be that hard, could it? With the help of her new friend Alani and some of the quirky residents of Aloha Lagoon, she just may be able to pull it all off...and still keep everybody alive!

About Aloha Lagoon:
There's trouble in paradise...
Welcome to Aloha Lagoon, one of Hawaii's hidden treasures. A little bit of tropical paradise nestled along the coast of Kauai, this resort town boasts luxurious accommodation, friendly island atmosphere...and only a slightly higher than normal murder rate. While mysterious circumstances may be the norm on our corner of the island, we're certain that our staff and Lagoon natives will make your stay in Aloha Lagoon one you will never forget! visit us at alohalagoonmysteries.com

Second time around is just a great!!

I have read this book first when it was released and it was so nice to revisit Sam's antics from the start again. I have read all the Samantha Reynolds books and some of the other books in the Aloha Lagoon series.

This audio was narrated by Tessa Needham this was a first time listen to this narrator for me and at first, I was very unsure if I like her take on this story. But as the story went along and my memory of the story was refreshed I came better accustomed to her tone, speed and voice.

Beth Prentice has a way with words that entertain you while putting a smile on your face with her wonderful character's antics of life. Sam is no different she will make you laugh, make you cringe, make you say stop and thing, but most of all she will make you keep reading to learn more about her and her life. Sam has recently moved from Sydney Australia to Hawaii to be closer to her mother and twin brother, Luke. But living with them both was not in the plan, she has had trouble finding work but as the book starts she finds herself a job as a surf instructor at the local resort. What could possibly go wrong with this type of job??????????

Ssm soon finds herself as an amateur detective when her mother is taken in for questioning about murder and all the fun will not stop there as a second murder will have her brother in the hot seat next. As both victims reside from the nursing home were her mother and brother work.

Sam is not alone in her sleuthing she will involve her new friends Alani and the sexy bartender, Casey. This book is full of fun, mystery, secrets, family drama, attraction and lots of laughs to keep you fully entertain to the very last word. If you are like me you will not see the end coming at all!!!!

Whats better than a good story full of fun and mystery? I enjoyed this book. I like good clean, and a bit sandy, story laced with humor and complicated relationships!

Samantha moves from Australia to Kauai, where her mom & brother live.
I do not know why this author chose to use Kauai as the setting. She has very obviously never been to Kauai or even bothered to research the island. She names areas that are not a part of Kauai but Oahu, comments "it hardly ever rains here" when rain is a daily occurrence on Kauai. As someone who vacations on Kauai every even year, I was looking forward to reading a book that takes place there. She could have been in any area with an ocean nearby.
Now, regarding the story. I thought the main character was 18-20 years old at first, surprised to find out she is 28, very immature. She spends more time in the bar at the resort than she does working. All in all, she was not a very likable character.

Beth's Aloha Lagoon stories are focused around the quirky character of Samantha Reynolds who has a tendency for getting herself into trouble. This was a fun read, with some good laughs and a dose of intrigue.

I had to laugh straight up when Samantha goes to a job interview as a surf instructor and has absolutely no idea what she is doing, lol, it's something like I might do myself, in at the deep end and all that jazz.

On Samantha's first day, a body washes up in the surf and she is drawn into a murder mystery that sees her putting herself in danger while uncovering secrets and trying to clear the names of those closest to her.

I loved the cast of characters who are part of Aloha Lagoon and who welcome Samantha to the island. There's hunky British bartender Casey, who I'm totally in love with, what a hunny he is. Then there's fabulous new best friend Alani who owns the surf shop. Samantha's brother Luke is a great brother even if he can be moody at times. Alani's grandmother is good fun and I enjoy the scenes she is in while the girls are gathering information (or is that gossip).

The bad guys are not very nice at all, and really, they aren't overly smart either. But they can be dangerous.

I really enjoyed my first visit to Aloha Lagoon and am going back to visit Samantha and co tonight with Lethal Tide.

I love visiting Aloha Lagoon !! As soon as you start reading one of the books in this amazing series, you are completely lost in the resort, the people and murder !!!

Deadly Wipeout by Beth Prentice is the third book in this series and because the books are all written by different authors, you do not have to read the Aloha Lagoon Resort Mystery series book in order.

Deadly Wipeout follows Samantha who just moved from Sydney Australia to Hawaii. She moves to Hawaii to live with her mother and twin brother, Luke. Being new to the island and desperate for money, she applys for a job as a surf instructor for the resort and gets the job !!! Unfortunately on her first day a dead body washes up in the waves knocking her for a loop.....even though she is new to the island and knows no one, that doesn't stop her from diving full force into the investigation when her mum is taken in for questioning !! Come to find out the deceased was a resident at the nursing home that her mum and brother work at and had recently changed his will leaving her mum everything. Things tumble downhill and spiral when another resident is found murdered and her brother is a suspect......Sam and her new friend, Alani, will do anything to prove their innocence.

You cannot help but fall in love with Sam and her nervous ways, especially when she is around the sexy bartender, Casey and for the rapidly growing friendship she is making with Alani. And even though she is new to the area and doesn't know a lot of people, it doesn't stop her from he devotion to her family.

It is said that Prentice's "main wish is to write books you can sit back, relax with, and escape from your everyday life.....and ones that you walk away from with a smile !" and that is absolutely what she did with Deadly Wipeout. I know I escaped while reading it and sure had a huge smile on my face when I finished. You would think that after reading a great book like that would have the reader sad upon completion of it, but knowing that there are more books in the Aloha Lagoon Resort series to read, you know that the adventure will continue......

Perfect for when you are sitting outside on a nice warm day or waiting in line somewhere. It is a quick, fun read.

This is my first book from this author..but it won't be my last. I love this series. Each book is written by a different author but it's as if they were all sitting at a table together. I love how characters from some of the other books are mentioned in this book. It's like visiting old friends.I like how the main character Samantha,talks her way in to getting a job. She is desperate and wants to start a new life and being with her family again. On her first day as a surfing instructor, a body washes up and plows right in to her. This begins her adventure of mystery,murders and secrets. I highly recommend this book if you love a good mystery with a great storyline . Fun and entertaining

Sam moved to Aloha Lagoon from Sydney to be with her family, which was her mother and her twin brother. As she was out of a job, she applied for the position of surf instructor at the beautiful resort, thinking that surfing was like riding a bike, you may be out of practice, but you never really forget. Unfortunately for her, she was landed with the kids class as Brad, the regular instructor was away with appendicitis. If that was not bad enough, when she was in the water with the kids, a tide rushes in, pushes her over head first into the ocean, right in front of the cute bartender that she fancied, only that it wasn't the tide, it was a dead body. A dead body who used to be one of the residents of a retirement care home that Sam's mother works at, a resident who has named her as the sole beneficiary to his will. Detective Ray thinks that this is highly suspicious, enough to make Sam's mum a murder suspect, and he was not about to change his mind in a hurry.

This is the first book of Beth Prentice's that I have read and I enjoyed it very much. I was offered an ARC and this is my honest opinion. I will certainly be on the look out for more of her books

Mind Manipulation for Beginners: A Practical Guide to Hypnosis

In Love with the Veterinarian

Falling For Her Ex: Falling for... Series