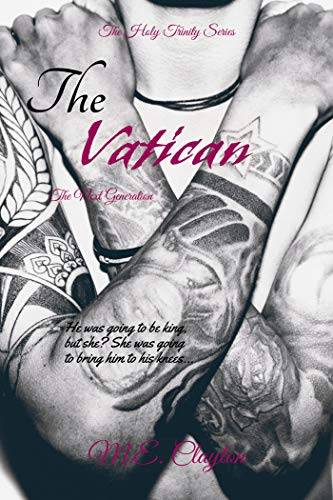 She’s thought of as The Vatican for a reason. As the only person capable of toppling an entire crime organization, ‘Ria’ Fiore is far more powerful than she realizes. Her father is The Holy Ghost and her mother is The Church. With Fiore and Mancini blood rushing through her veins, Ria’s as strong, stubborn, and fearless as any of The Benetti Family male members.

When a secret come to the surface, impacting her life in a way she never suspected, all bets are off. Being raised by The Holy Trinity, Ria views the secret as an act of betrayal, and it cuts deeper than anyone could have ever guessed. When Ria finally unleashes her ruthless side, no one is safe, and no one knows how to stop her.

He’s the firstborn, and the heir to The Benetti Crime Family. As one of the few people who understands the difference between being a Benetti and being The Benetti, Francisco was born and bred to lead. His father is The Father, his uncles are The Son and The Holy Ghost. With brutality, intelligence, and strength running through his veins, Francisco is the only person fit to take over when the times comes.

Except for one other person.

When a secret finally comes to the surface, and all hell breaks loose, the damage is devastating. Being raised by The Holy Trinity, Francisco knows not to ever underestimate the enemy, and the lines are clearly drawn in the sand. When Francisco finally has to make a choice, he does it the same way he does everything else, with absolutely no remorse and no mercy.

In a fight for their lives, there can only be one winner. But in a world where betrayal is the worst act imaginable, can love conquer the waves of disloyalty that have rocked the organization?

Ria’s on her way to burn down everything in her path, and Francisco’s the only one who can stop her.

Note: This book contains violence, adult language, and adult situations. This book is not intended for persons under the age of 18.

A hell of a book

The entire series was fantastic. The end of this book about the new generation will not disappoint and I am waiting for the next series and see what the next generation will do. Loved Ria and her principles. It was good to see how she expressed herself and Trans I do being the Alpha helped her, but new how wrong certain things were and helped Ria.

I LOVED that this book was written to finish off the series. It was perfect. We all know how the other children's lives end up without having their stories written. Another great series by one exceptional author. Thank you.

Francisco is next Gen Luca

Loved, Francisco's story is just as good as Luca's story. Had trouble keeping up with all kids names. Good short read.

The Lady is Trouble

Ready. Set. Disney: Plan, Prepare And Save Big On Your Disney Vacation!