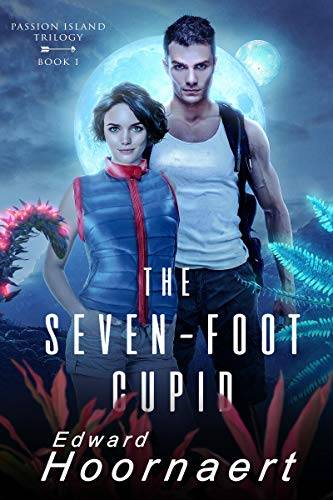 Ember Dayle prides herself on handling anything her newly colonized planet can throw at her. After an injury, she’s determined to prove herself again. She gets her chance when ordered to explore a mysterious cave on a wilderness mountain. Until that’s done, the last thing she needs is the distraction of a man.

Tyler, an explorer from her town’s fierce rival, is sent to explore the same cave. Like Ember, he’s been in an accident…but he was the only survivor. When he meets Ember, he’s drawn not only to her beauty and toughness, but by her ability to deal openly with her accident.

Booker is a naïve Apprentice Cupid for a secret group hoping to make the colonists healthier, and smarter by helping people with strong genes fall in love. His first assignment: Ember and Tyler. His strategy: lock them in an abandoned cabin together. With nothing else to pass the time, maybe they’ll find love.

He doesn’t realize he’s locked them in with the fiercest, most intelligent native beast ever discovered. Can love help them survive?

Christmas in Quincy (The Edens)