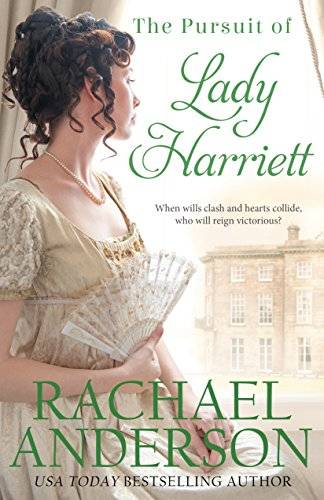 When wills clash and hearts collide, who will reign victorious?

Termed an Incomparable during her first London season, Lady Harriett Cavendish is beautiful, spirited, and confident, capturing the attention of a great many suitors. Unfortunately, they all failed to capture her attention, and she concluded the season as unattached as she’d begun it.

Only weeks prior to her second season, Harriett encounters Lieutenant Christopher Jamison while visiting Tanglewood Manor. Recently returned from war, the lieutenant is everything that Harriett's previous suitors were not. He’s arrogant, ungentlemanly, irritating, and challenges her at every opportunity. When he goes too far, Harriett decides that it’s time to turn the tables on him. But as she sets out to put the lieutenant in his place once and for all, she discovers there is more to him than meets the eye, and when it comes to matters of the heart, she has no control whatsoever.

Book three in the Tanglewood series and I'm sorry to see the series end. I really enjoy a series where characters from previous novels move through the books that follow and in this book, we get to visit with characters from both the previous novels in this series. Lady Harriett and Lt. Christopher Jamison seem to be at crosshairs with each other from the start ... she wants to beat him at all things and usually fails and he doesn't seem to take most things very seriously, both of which frustrate her to no end. Feelings grow throughout the story, yet neither seem to be able to let the other see how they truly feel. Everything resolves very nicely at the end of the story. If you like sweet and clean Regency romances, you'll enjoy this novel.

I enjoyed the third book in the series. They were all great.

I read this book first and then quickly read the other two books in the series. I enjoyed them all very much. Now I'm just sorry there's no other book in the series. Lady Harriet may not have been quite as endearing as Miss Lucy or Miss Cora, but her relationship with Lieutenant Jamison is more humorous, delightful and fun.

Vapid, shallow, but had a lot of potential.

I simply could not get into this book. The other books in the series were good, but this one felt lacking to me.

Lady Harriett’s back-and-forth emotions went from 1 to 10 every other moment spent in the company of the man she eventually realized she loved. She was so childish, so immature, so spoiled, so selfish. She rarely thought about anyone other than herself. Even her dearest maid, she had anger issues toward, depending on her fluctuating mood. There was very little in the way of Lady Harriett’s redeeming qualities. Her character was vapid and annoying.

Other things bothered me. Is it so likely that Lady Harriett, the daughter of an earl, would fall for a mere leftenant and no one in her family would question that, in doing so, she would be marrying beneath her in a social sense? That she wouldn’t have a split second thought of it, herself? In the end, love is love, and it doesn’t matter. But the book failed to mention it. It could have been an interesting dilemma for Lady Harriett to mull over and show some depth as she works through the social complexities.

There was talk made in the reviews about the preceding book’s plot line, regarding a gentle lady procuring the role of housekeeper without qualifications being not true to the period, but a good story line. Perhaps that same train of thought is simply the case here, too.

I also disliked how the leftenant had to do nearly all of the apologizing. Harriette’s rants and perspectives were so narrow, and only she could ever be right. Could she not fail to see the humor in some of the situations? Could she not see another’s perspective? A relationship is give and take. It is a partnership. Not all one-sided.

All of that said, the novel did end on a beautiful note— something the author is very good at. To love be loved for who and what we are is a rare treasure. It is something we all seek. I simply couldn’t believe that the characters would arrive there so speedily and so seamlessly after a tremulous 95% of the rest of the novel. I could only hope that, in the void of imagined “ever after” that we are left to create on our own, that Harriett grew up, got over herself, and learned that true love is about mutual self-giving.

Romantic and tasteful of two people discovering each other.

Tangle wood belonged to Harriett's family before Jonathan bought it from her brother. Cora was her friend that married Jonathon and it was their wedding that brought her back to Tangle wood. Then this story really gets interesting when Lt. Christopher Jamison shows up after the wedding. It is a rollercoaster ride of fun,misunderstandings,aggravation,and loving life that captures your attention and draws you right into this wonderful story. Loved this series!!

Challenges for the perfect persons

I felt like I was there. Very descriptive and interesting characters. I was cheering that they would get together. It had humor and displayed sincerity. An enjoyable story.

What a wonderful , enjoying Series, the kept me entertained waiting to see what happened next. Nowthey are over I can notwait to what is on the horizon. Enjoy asIhave..

Love Me Like You Mean It: A Sweet Romantic Comedy