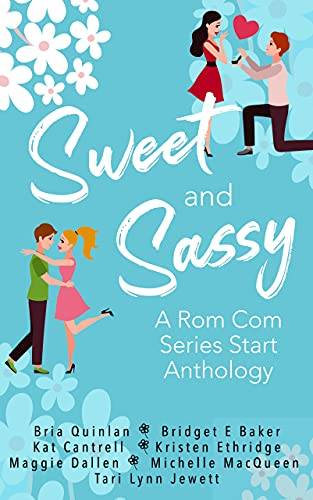 After Sarah assures her friends she'll be bringing a plus-one to their New Year's party, she has just a month to find Mr. Right. Will one bad date after another convince her to give up the ruse - or could the perfect guy be hiding right under her nose?

Thanks to lousy parents, Mary swore off ever having kids and threw herself into charity work instead.

But she won't discover he's a widower with two kids for three more days.

FAKE MARRIAGE TO HER BEST FRIEND by Kat Cantrell

Nomi Hannon is sick of losing. She's not about to lose the city council election. Too bad she just accidentally starred in a compromising photo her squeaky-clean opponent is all too willing to use against her. Surely marrying ex-CEO Malone DuMar, the guy in the photo—her best friend—will solve the problem…right?

It's a simple plan. Only pretend. But that was before the kiss that changed everything.

The Right Resolution by Kristen Ethridge

When the clock strikes midnight at her beachside cottage on New Year's Eve, Eve Larson plans a fresh start following a year of heartbreaking disappointments. But when an enemy from her past tracks her down, will he stand in the way of rebuilding her dreams? Add in a treasured royal heirloom, New Year's resolutions, and sweet kisses on moonlit beaches to make the start of one unforgettable year.

THE (NOT SO) PERFECT DAY by Maggie Dallen

Ellie's planned the perfect wedding, just…with the wrong groom. The clock is ticking to Ellie's big day. There's only one thing missing—her best friend. As a travel photojournalist, Ian's often off the grid, so she's not worried--much. After all, he's always there for her when she needs him. When Ian finally arrives mere days before the wedding, he's not content to play best man. He's back to claim her heart. But can he prove what they have is true love before she walks down the aisle with the wrong man?

JESSE AND THE ICE PRINCESS by Michelle MacQueen

An ice princess doesn't fall for the hockey captain's charm unless said captain has a habit of always getting his way.

Charlotte wants nothing to do with Jesse. Not when he shows up to watch her skate. Not when he orchestrates her detention. And especially not when he convinces the principal to force her into helping the no-win hockey team change their record.

What if he's more than charm and semi-okay hockey skills? Is the boy with no rules worth breaking all of hers for?

Lucy, wakes on New Year's Day to find a message from a secret admirer on her favorite social media site!

Each day he posts a photo with a clue to his identity, a message letting her know he intends to ask her out for Valentine's and the hashtag #PleaseSayYes. Before she can decide what to do, the posts go viral, and the whole world weighs in.

Should she take a chance?  Will social media bring them together, or keep them apart? Only chocolate, wine and girlfriends can help her now.

Between Ink and Shadows