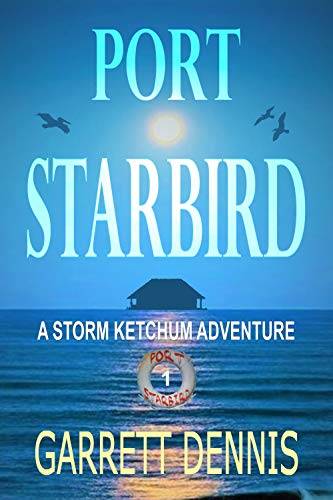 MYSTERY, HISTORY, AND ADVENTURE ON THE OUTER BANKS!
Where is Port Starbird? Read this quirky & engaging tale and find out!

Friends help you move; best friends help you move the body!
Storm 'Ketch' Ketchum, a damaged emigre to the coastal town of Avon on North Carolina's Outer Banks, likes to mind his own business and isn't any kind of detective - until he's forced to become one by extraordinary circumstances. On the verge of losing his modest waterfront home to an unscrupulous developer, Ketch stumbles onto the scene of a crime that might expose the perpetrator of an unsolved murder and enable him to save not only his own home, but also the similarly threatened Bohemian boatyard community he's inexorably drawn into. And in case Plan A fails, he's hard at work on a Plan B that's both laudable and pitiable. Together with his loyal dog, a salty charter boat captain, the sketchy denizens of the boatyard, and an alluring scuba diving instructor who may or may not have a hidden agenda, Ketch struggles to make sense of his new reality, while trying to save some of the things that really matter along the way.

If you're pining for John D. MacDonald and Travis McGee, Ketch might be your guy. Like Hemingway's Old Man, he reveres his island and the sea; but unlike Santiago, he doesn't fish - and despite his solitary nature, he and his boatyard friends find themselves embroiled in coastal intrigue more often than not. If you read the Hardy Boys series as a kid; if you're a fan of the Outer Banks lore of David Stick, Judge Charles Whedbee, or Ben Dixon MacNeill; or if an ecological and literary juxtaposition of Barbara Kingsolver, Randy Wayne White, Jimmy Buffett, and Carl Hiaasen might float your boat, you should enjoy the Storm Ketchum Adventures.

"Dennis has woven a thick line of suspense through a coastal cultural dark comedy." - Bookstore Reviewer
"The characters are so well written that you almost want to invite them to your next barbeque." - Red City Review

Dancing Away With My Heart: A Small Town Southern Romance