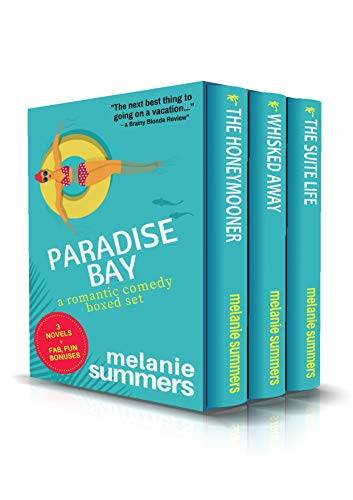 THE HONEYMOONER
From bestselling author Melanie Summers comes the wickedly funny, ridiculously romantic spinoff of her highly-acclaimed Crown Jewels Series…
Twenty-eight-year-old workaholic Libby Dewitt lives by the motto ‘if you fail to plan, you plan to fail.’ She’s finally about to start her dream life with her steady-as-a-rock fiancé, Richard Tomy. Together, they’re the perfect power couple—right down to the fact that he’s agreed to use their honeymoon to help further her career in mergers and acquisitions. But ten minutes before the wedding, her dreams dissolve via text message.

Devastated and humiliated, Libby escapes to Paradise Bay alone. She’s got two goals for her trip: to devise a plan to get Richard back and to convince resort owner Harrison Banks to sell his property to her company. Unfortunately, when she arrives, she discovers that tall, dark, and built Harrison is not about to make anything easy for her.
Instead, he derails her plans while at the same time, bringing out a side of Libby she’s kept carefully tucked away—a carefree, adrenaline junkie. After a few days together, Harrison’s got her wondering if the life she always wanted was meant for some other girl. Suddenly, Libby must decide which version of herself she wants to be.

Will she go back to her comfortable, safe life, or risk everything to be with the only man who’s ever made her feel truly alive?

At twenty-seven years old, Emma Banks has big plans for her life. After graduating from the prestigious Culinary Institute of America, she's ready to take her place as head chef at one of her family’s resort restaurants. But upon arrival at Paradise Bay, she’s shuffled off to the resort’s new private island getaway, where she’ll be stuck catering to the rich and shameless. Her first assignment is to serve Pierce Davenport, an infuriatingly arrogant writer with a palate that’s about as adventurous as a plain boiled potato.

Putting Pierce and Emma together is like combining orange juice and toothpaste. Will their differences be their ruin or will they be the secret ingredient to each other’s success?

Twenty-six-year-old single mum Brianna Lewis (a.k.a. Bree) doesn’t believe in fairy tales—not after being abandoned by the father of daughter, Isabelle. A law student by day and concierge by night, Bree’s determined to give Isabelle the life she never had. Suddenly finding herself in dire straits, she converts her garden shed into a rental suite in hopes of climbing out of the financial hole she’s in. But when the only person interested in renting the suite turns out to be to Leopold Davenport, the ridiculously good-looking co-worker she loves to hate, she knows she must choose between being happy and being broke. But as she gets to know him, she discovers there may be more to him than flirty smiles and empty charm.

Can Leopold make the leap from ultimate playboy to become the man Bree needs in her life?
Will Bree allow herself to believe in happily-ever-afters or will she play it safe and hang a do-not-disturb sign on her heart?

Thoroughly enjoyed the book. I did laugh out loud in places. Very vivid and fun characters. Makes me want to visit Paradise Bay.

This trilogy was a perfect escape on a rainy weekend. Melanie creates characters that feel like friends. I laughed. I cried (happy tears). I couldn’t put them down. I’m going to miss Paradise Bay, but thanks for a great weekend vacation. I’d give it five stars on TripAdvisor!

So funny and sweet

Melanie Summers is a talented writer. These books are So funny they wer hard to put down. Thank you for the laughs.

I love the way she develops the characters! Can't get enough of her books.

Can’t put my it down

A funny, sweet and crazy love story. A storm, a wedding to attend and an helicopter crashing in a deserted island. A good combination of two different people Paige, city girl, with Mac, divorced pilot. They will fight the attraction but will they resist it or will they fall in love?

Light hearted feel good romantic comedy. A little sexy, but leaving the details to the readers’ imaginations. Three books, each making you want to read the next one!

This series of books were a great pastime during the quarantine, kept me completely entertained page after page-day after day,,

Murder at the Manor: A 1920s cozy mystery

Sword of the Seven Sins: A Novel

Wish Upon a Shell