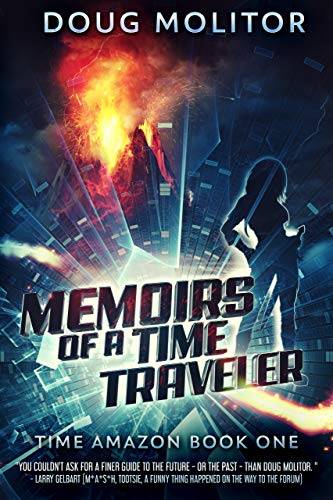 "You couldn't ask for a finer guide to the future -- or the past -- than Doug Molitor." -- Larry Gelbart (A Funny Thing Happened on the Way to the Forum, M*A*S*H, Tootsie)

In this fast-paced, thrilling journey through time, archaeologist David Preston comes into possession of a baseball supposedly signed by the legendary Ty Cobb in 1908, thanks to Ariyl Moro and her mysterious companion, Jon Ludlo. Except the ball tests out to be an impossible paradox. It was signed with a ballpoint pen (not invented until 1938) using ink that's several centuries older. But then, Ariyl and Ludlo aren't who they claim to be either.

Ariyl, a voluptuous 6-foot-3 beauty, turns out to be a tourist from a 22nd century paradise where time travel is the latest craze. Unbeknownst to her, however, her traveling companion, Ludlo, is a psychopath whose thefts are starting to alter history. In a world were even small changes in the timeline can cause catastrophic consequences, Ludlo's actions may completely destroy the future.

To stop Ludlo, David and Ariyl must solve a mystery involving Bronze Age swordsmen, modern-day Nazis, a steampunk world, Albert Einstein, some highly skeptical Founding Fathers, and a Golden Age Hollywood where the murder of a beloved movie star will spell doom for civilization.

Fun read with the science intact

I have read many books about time travel, but this has to be the most fun one that I've read yet. The author has fun with the characters and the history, and makes this an enjoyable read. There's no sexism here--the female character is the strong lead and the story goes into some detail about Ariyl learning beyond her apparent means...so I disagree with some of the other reviews about the treatment of women. The predicaments that David and Ariyl find themselves in are sometimes comical but always interesting. I highly recommend this book and the entire series.

!A little bit weird! It was a little hard to get into.I guess I'm not into this genre. I'm sure there are lots of people who will like this book. Sorry not me.

Once you start reading, you can't put the book down. Than you have to start the next one, and the next. I can hardly wait for the next book. Hope its not the end. What a great writer.

This book has a bunch of firsts for me

I got the first book because it was free. When I finished the first book at 11 p.m. I got out of bed and order the next book in the series and then bought the rest. Normally I do not find the free Amazon books worth continuing but this is the exception. Another first is when I finished fourth book there was a preview of the fifth that was suppose to be out. I actually found the web site for the author and sent him an email asking when that was suppose to be out. Over all this is a fun and enjoyable series somewhat on par with the Stephanie Plum series. A great mixture of humor and history rolled into one.

This perked my interest since it takes place here in Southern California. I especially liked the part where they were in Altadena during the glory years. And I almost fell on the ground laughing when the amazon from the 22nd century knocks the crap out of eight officers from a nazi-like police force. It was almost as much fun as watching Wonder Woman defeat Germany's WWI army single handedly. The writing style is very engaging.

While there are no grammatical errors in this writing, I did find it a little lacking in rhe delivery. The story is o.k. if somewhat mundane. Some of rhe adventures were a.little to easy. Getting actors to actually go up against bad guys with guns....nah, won't happen. The author does have potential, just not in this one.

Step back in time

A Ritual of Fire: An FBI Dragon Shifter Adventure