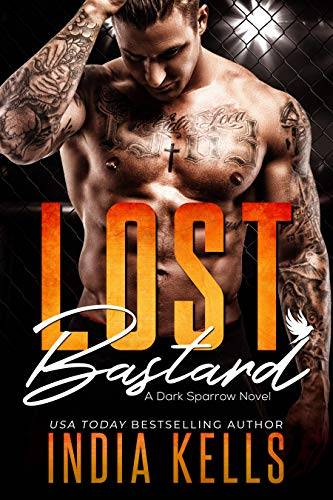 “This book will grip you from the very beginning to the very end. The author writes this book world that you can’t help but get lost in. The suspense and twist and turns on top of family drama, mc clubs, gangs and mob and then an unexpected love that has you rooting from them and secretly adding a new bbf to your list. Loved this book and could re-read it again. Five stars all the way”

A debt needs to be repaid… whatever the cost.
Deva Landry is relieved to be rescued from the MC princess life. But now the angel who saved her is back to collect payment.

The cost? Deva is assigned to babysit bad-boy cage fighter Aleksei Voronov, forcing her back into the murky underworld of Chicago. Prepared for the worst, she’s shocked to uncover a kindred spirit, a wounded soul like hers. Chaos strikes and the two are thrown together on an impromptu mission to stop a city-wide massacre.

Deva’s always prepared for battle, but can she overcome the burning desire for the inked deviant who represents everything she thought she left behind?

LOST BASTARD is a full-length romantic suspense from USA Today bestselling author India Kells about a Russian MMA fighter and a woman who only wanted to forget her past. It’s the first book of the DARK SPARROW series.

“An underground fight ring, a secret operative, plus steamy scenes with plenty of muscles to fawn over and nicely written. Not to mention, there are family drama and secrets. What more could you ask for?”

Deva, a strong and independent woman who has to return to a life she left behind to repay an old debt. She meets and begins to fall for Aleksei, who is an MMA fighter and deeply involved in the life Deva promised to never return to.
I don't normally enjoy MC novels, but India's writing brings these characters to life. Highly recommend this for steamy, dark romance lovers.

I went into this series backwards and started with the 4th book. While they can all be read as stand-alones, I will say that this is such an enjoyable ride when you start at the beginning! I love the world that India has built here. This is the first I've really read of her novels and I can't wait to sweep through her entire list.
I've got a real weak spot for suspense mixed in with my romance and this book hit that craving. Deva was such a strong heroine, and Aleksei stole the show with his devotion and love for her. I can't wait to see what book 2 holds!

When you get drawn back into the life you thought you have left behind, will she have the courage to loss everything for love.

Deva owes everything she has to one woman who she promised in return one favour, but she she receives a phone call activating "Dark Sparrow" Deva gets worried that she will be drawn into the world she left behind.

Aleksei has fought hard in life literally as he is involved within the underground MMA fighting scene, until one day with the gym he sees her from the ring. He doesn't know why he is so attracted to this formidable woman but he needs to get closer to her. The only problem is he is dangerous and she is innocent how can he involve her within his world.

Until one night when both worlds collide and will they ever be able to pursue the love and attraction which is there for both of them.

I loved this story as the first in the series it lays some of the groundwork for the series but it is gripping from the first word written. The story is full of twists and turns with gangs and mobsters, killings, manipulation in buckets.

The secondary character provide a great arc within the story and I loved how they all interacted with each other and love the way the story weaves and finishes off brilliantly. This is not the first book I have read by this author but this maybe the best series I have read in a longtime. I recommend this book if you love Mob bosses, strong men but even stronger female heroines.

This is an intense story. I love how strong of a character Deva is. She hits a great balance of fierce and feminine. I enjoyed the way the layers of backstory were dripped throughout. The timing of it added depth and emotion. There is an emotional moment in chapter thirty-seven. Not going to lie, I teared up. Lost Bastard is a stellar read. You won’t be able to put it down.

I was totally all into this book.It definitely has everything! I was so into it that I couldn't put it down. I can't wait for the next book. I am totally into this series. India Tells is my new favorite author!

This is the first book in the Dark Sparrows Series. It is a fantastic book and gets the series started with a bang. Beatrice Dante, founder of Purgatory, has a special name for the people she rescues...Dark Sparrows. They agree to return a favor if and when she needs it. She needs a favor now and Physical Therapist Deva Landry has the skill set she needs. Ten years after her rescue Deva is returning to Chicago to help keep one of Lazarus King’s brothers safe from their megalomaniac father Jamieson Finch. Aleksei Voronov is Russian born and has toes to the Bratva and underground fighting. Deva’s job is to get close to Aleksie and report to Gabrielle Thorne her findings. Deva’s past comes back to haunt her and she is in danger from it and Finch. Aleksie is suspicious and deadly too. This book has all the good stuff...hot men, MMA fighters, underground fighting, MC’s, mobs, gangs, Bratva, a psycho dad or two, alpha protective men and two lost souls falling in love.

This romantic tale is intense

Aleskei and Deva such a perfect couple. This book was so intense. So much was going on from the first chapter that it almost lost me, so I am glad that I continued to read this story. Deva is hiding from her powerful father, but she owes a favor to the woman that helped her escape. The favor is to help Aleskei and see if he has had contact with his father. Deva bites off a bit more than she can handle with Aleskei. . . . Will she cave. . . . Read On!

This book is AWESOME.

This book is AWESOME.

I've never read one of India's books before, but I absolutely LOVED it! A truly gripping romantic suspense, it features Deva, a strong and independent woman who tries to forget her past but, at the same time, isn't afraid to use what she learned from it.

And Aleksei, who was seemingly one person but turned out to be someone completely different...a twist that was sort of thrown in at the end but one that I never saw coming.

The chemistry between Deva and Aleksei definitely sizzles, but my favorite interaction between them was at the very end. No spoilers!

The ONLY reason I gave this book four stars was because of the egregious amount of proofreading errors from start to finish in the copy I bought from Amazon.