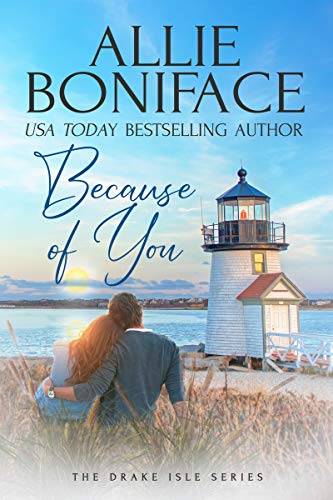 He’s the biggest, baddest CEO in town. But the small business owner blocking his next deal is the college sweetheart he’s never gotten over. Choose love or money? The answer’s about to surprise them both....

Ten years ago, Piper Townsend fell to her death from the top of a fraternity house, and no one on Drake Isle has ever been the same. Misterion College closed down. Blake Carter's fraternity and family name were scandalized. And the love of his life fled the island, brokenhearted after losing her best friend.Now Blake's a big-shot CEO, looking to expand his business and prove himself to his doubting, domineering father. The only thing stopping his island takeover?Emmy Doyle.Only Emmy’s not so brokenhearted anymore. In fact, she owns a yoga studio in the oceanfront building Blake wants to buy. They haven't spoken in ten years. They're on opposite sides of a billion-dollar deal.But old flames die hard, and sometimes soulmates can set the world on fire all over again.Can Blake and Emmy make peace with the past and give in to true love? Or will they go down fighting and leave idyllic Drake Isle in ashes? If you like small-town romance and second chances, then you'll love this first book in the powerful Drake Isle series by a USA Today bestselling author!

Multiple viewpoints and easy to follow. It does end with an HEA and possibility of looking into death that might not accidental. Minor formatting errors, no editing errors, gratuitous violence or drag-you-down drama.

Enjoyable story of second chance love with plenty of hurdles on both sides. Realistic procedures, actions and reactions. Believable dialogue and characters with distinct personalities.

No desire to re-read this story. I am interested in other works by this author.

I have to say that I read the books out of order, but I head to go back to the beginning of this series, and I am so glad that I did. It allowed me to learn more of the history with the main characters, Emmy and Blake. Emmy was Piper's best friend, Blake was Emmy's boyfriend, until Piper died. Their whole world died along with her. It's been ten years since that time and now Blake's company wants Emmy's building. Not going to happen. There is still a spark there, but can she trust him. Their journey will be be like the storm outside.

I enjoyed this book. It was a fun read that drew me in and I wanted to know how it ended! I couldn't guess the way the details finished out, which is good, I don't want my books to be predictable. The romance is just steamy enough, not boring and not too much. I liked this book so much I sought out others by the same author. Recommended.

They were together in college and now years have passed. They reconnect wen he shows up to make an offer on her yoga business building and her home. He husband has passed away n her kids are grown. It was a great book

This is a new author for me and I know I will be looking for more from her. I enjoyed the emotional rollercoaster ride and his book took me on. The characters are connectable and made the story engaging. I didnt regret picking this book up and neither will you. A great book to warm your night. I highly recommend this book.

BECAUSE OF YOU is a great read! I devoured it in one day, just couldn’t put it down. My heart went out to Emerson and Blake as they fought their way back to each other. Grab a few tissues and enjoy!

Charming tale of romance and loss. Endearing characters with a touch of mystery to tease the reader. I received a copy from BookSprout. This is my honest and voluntary review.

The cover is light and airy with this scene of the beach and certainly communicates the mood of the book. The pensiveness of this young woman on the cover as she gazes out at the restless ocean is truly what you will find in Ms. Boniface’s book one of the Drake Isle series.

Emerson Doyle, Emmy to anyone who knows her, owns a small yoga studio on Drake Isle in the triple-decker house she and her mother had renovated and lived in together until her mother had passed. Emmy doesn’t like to go up to the third floor of the house. She lives on the second floor and the yoga studio is on the ground floor.

Blake Carter works and lives in Boston. His father is his immediate boss. Not always a comfortable position to be in for Blake as he feels he’s been under his father’s control for far too long most days. And now his father is sending him to Drake Isle to try to buy the very house that Emerson Doyle lives in. And he’s supposed to get it on the cheap because she’s behind on her payments to the bank and is about to lose it anyway.

But Blake and Emmy have a shared past, a very close shared past. One that neither of them has ever really been able to forget or put behind them properly. And then there’s Piper Townsend. She still lies between them and they need to deal with her, but neither one of them really seems to know what happened. They aren’t even really sure which one of them abandoned the other. They do know they aren’t done yet, though.

Well written, heartwarming, slow-moving, and sweet, all the things a second chance love story should be. Set it in a beach town, add in the college they both went to and toss in a broken engagement and a dishonest ex-lover who runs off with the bank balance, and you’ve got a great rainy day read. Recommended for romance readers who love to see all broken hearts heal.

Overthinking: How to Stop Worrying, Overcome Anxiety and Eliminate all Negative Thinking