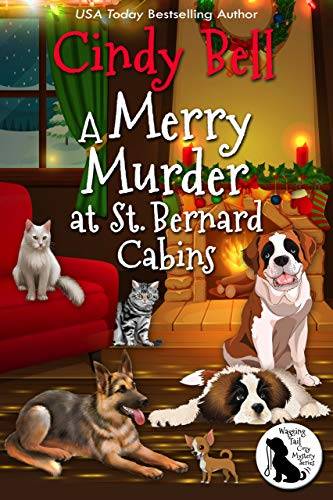 A pet-loving sleuth. A perplexing murder. Will the murder be solved before the clues are buried forever?

Nikki Green is taking a break from walking and pet-sitting her loyal companions. She is going to a ski resort for the holidays for some quiet time with her family. To her delight her solo journey turns into a group excursion. However, the trip doesn’t go according to plan when Nikki lands up in the middle of a snowstorm.

Then things go from bad to worse when someone is murdered, and her brother is the prime suspect. With the roads impassable, and two inexperienced officers on the case, Nikki decides to take matters into her own hands and clear her brother’s name. She plows through a mountain of clues to reveal the truth before the snow melts and the murderer disappears forever.

It’s a slippery slope of suspects and danger as she goes hurtling towards the truth.

That's a lot of snow!

Best book to read in the triple digits of summer in the desert. All the talk of snow, actually cooled me down some. Perfect short story to enjoy and clear your mind in between long novels. Leave it to Cindy Bell to entertain me in such a short time.

I did enjoy reading this book. I wanted to know how it ended and was pleased with the ending. Lots of misdirection, limited clues, lots of possible bad guys.

What a nightmare to be snowed in and a murder happens! Of course our intrepid heroine is on the case! This is such a fun cozy mystery series. The characters are people I would like to know, the setting is great. I will read more in the series.

A Merry Murder at St Bernard Cabins by Cindy Bell

Who killed her and why??? A little avalanche never stopped Coco, did it??? I enjoyed the story and recommend the book.

Enjoyed the story and characters, good plot and interesting twists. However, I wanted a longer ending. It was too short and cut off.

Well written book. Interesting characters and plot. It starts out really sweet and then takes off! You better keep up or you may be lost! Like our heroine.

A Snowstorm and Murder

Nikki Green is excited to take a break from her pet sitting/dog walking business to spend time with her family at a ski resort over the holidays. Unfortunately things don't go as planned when first she is caught in a snowstorm and then someone is murdered and her brother is the prime suspect. Since the snowstorm the roads are not passable and only one officer is on the scene. Nikki knows her brother is not guilty and starts her own investigation. I loved the characters and the mystery is well written. I definitely enjoyed reading this and I highly recommend it!

How to Date the Guy You Hate: An Enemies to Lovers Romance