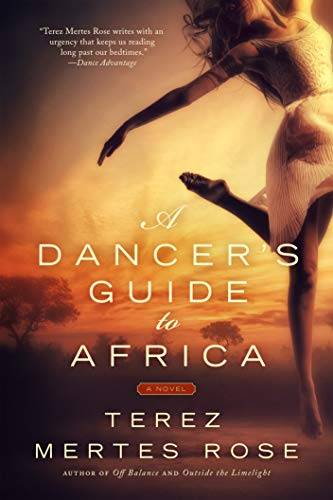 Still reeling from her sister’s unforgivable betrayal and a shattered relationship, new college graduate and ballet dancer Fiona vows to take a chance on herself. Her journey of self-discovery begins when she accepts a two-year English teaching assignment in Africa. However, Gabon, a country as wild and mysterious as it is beautiful, may be just another mistake in Fiona’s life. Christophe, her trainer, is a green-eyed, irresistible African, whose smoldering charisma threatens to undermine Fiona’s resolve. After fleeing the States, the last thing she needs is to fall for another womanizing heartbreaker. But the lessons Christophe ultimately teaches Fiona allow her to realize her deepest desires, unleashing the passion within her. Learning to let go of her inhibitions and exploring her own yearning become paramount in Fiona’s quest. And just when she discovers where her heart has been all along, an enemy threatens everything she’s worked toward. With her newfound courage and strength, will Fiona risk everything to fight back for the future she’s always wanted?

This book grapes me from the beginning with its portrayal of a talented dancer’s struggle within her family and subsequent decision to join the Peace Corps in Gabon Africa. The description of her interactions with fellow volunteers and adventures teaching English are so well described that I felt I was there. Well worth reading.

Fascinating, illuminating look at Africa from and American girl's eyes

Terez Mertes Rose writes with authority and insight. Never a dull moment, never a long, verbose passage to skim. I read every word.

So many lyrical passages in this novel just sing - elevating what could be a dry account of Africa's magic vs America's pragmatism to a sweeping tale of love, friendship, family, and cultural contrasts. The bug bites, worms, and other hazards leap out and remind us how brave the Peace Corps volunteers are, how tough the ones who don't drop out before the first year is up. Even if a volunteer feels initiated or enlightened at last, there are reminders like this from a native: "You might think you’re fully seasoned, that nothing more can faze you. To that, I’ll say, you don’t know Africa yet. You likely will never know Africa."

We experience the best and worst of it with Fiona. E.g.,
-- .... expect to be stared at, in your local store, in your neighborhood, as you walk, as you try to relax in your house. Your house might get broken into. That, and thefts, happened. Because you are American, people will assume you’re rich. They will also assume you’re CIA.

Fiona is robbed, of course, but ultimately she learns, "In a culture where just getting by and raising a family beyond childhood was a triumph over the odds, my household thefts were inconsequential to the point of being absurd."

Some of it is comical:
-- Those speaking English will call you Peace Corpse; no need to worry that this is a threat, it is simply how they think Americans pronounce the word “corps.”

I shall poss over in silence the scene involving "filaria, also called loiasis. You get it when a bite from an infected deerfly transmits a parasitic larva. For a while you can’t tell you’ve been infected—the worm takes up to a year to mature. But then the adult worm starts moving around.” I WILL SAY NO MORE!

Every detail has the ring of authenticity. Some of the food is great, but this:
> ....it had to be soaked in the river or a pond for several days before it was dried, peeled, washed again, then pounded to a pale mush. This was rolled in a banana leaf—the Handi-wrap of Gabon—to form a baton, which got boiled once again. When cut into slices, it looked (and tasted) like those translucent erasers I’d used in grade school. I ate it; it was amazing what you’d eat when you were hungry enough.

Unequal distribution of wealth is obvious in the cities. Again, the ring of authenticity is clear on every page:

-- French and Belgian expatriates and Africans from all over the continent mingled on the crowded sidewalks. On paved, four-lane highways, Peugeot sedans, battered Renault taxis and BMWs shared the road with dusty pickups.

-- Car horns, conversations and stereos kept noise at a blaring constant. Every nook of space, from stalls, covered tents and shops to card tables and spread-out blankets, was used to sell. Cheap perfume emanating from hundreds of sweating bodies did little to disguise the pervasive body odor, which competed with the stench of trash, decaying produce and unrefrigerated meat.

Everything is different for Fiona, fresh out of college, born and raised in Omaha. Transportation involves hitching a ride in a derelict truck and bouncing over rutted dirt roads.

-- .... the driver of the beer truck delivering me to Oyem was a madman. He raced the lumbering vehicle down the narrow, unpaved roads, swerving wildly to avoid crater-sized potholes that punctuated the washboard ruts. Chickens fluttered and goats scattered in panic as we thundered through villages.

Fallen tree in the road? In America, people attack the problem swiftly but in Africa, it may take 24 hours or more for the road to be cleared. Mail is unreliable with "packages from home that keep getting torn into at the post office and arriving to me empty."

But the magic, the music, the dancing!
-- "The music here was heart-stoppingly beautiful, the melody supported by the low, sonorous chords of an organ played so softly, you could feel more than hear...

-- I’d watch the Gabonese move with a freedom within their bodies that I couldn’t even imagine. Relaxed energy flowed from all parts of their body: the legs, the torso, the arms. Sometimes the movement would be so small, just this gentle, rhythmic shifting from one foot to another. There was an innate flexibility in their hips that I lacked.... Babies were tucked on their mother’s backs, tied in place with a swathe of fabric. Every movement the mother made, and she went right along with her business, the child felt. Jiggling, swerving, dancing, striding, straining, from a child’s earliest kinetic memory.

Fiona is a trained ballet dancer, but she resists invitations to join the natives until, one night -- well, no spoilers from me!

The dialogue is riveting, believable, and engaging, especially when Fiona and a fellow Peace Corps volunteer compare notes and wax philosophical:
-- Opposing ideas can both be correct. Ram Dass has a quote about that. ‘Across planes of consciousness, we have to live with the paradox that opposite things can be simultaneously true.’

And the deaths - the heartbreak - the necessity of learning to detach: “You learn to offer sympathy without empathy. Nonattachment is essential.” A 3-year-old girl dies. "Grief saturated the air, heavier than the humidity. But it was African-style grief. After five days and nights of endless activity at their compound, with visitors, rattling gourds, wailing, singing, celebrating, it all abruptly stopped and the household returned, eerily, to precisely the same scene and hub of activity as before."

And so Fiona dances. "The Gabonese were still going to tragically die no matter what I did. The thoughts made me want to crumple and sob. Instead I danced."

Dance, philosophy, questions, answers, life, death: so many big issues and conflicts come together in a coherent narrative. I love it. This:
-- How far can you go? The rules in ballet were simple. You focused on a fixed point on the wall to avoid getting too dizzy during turns. If you failed to do so, the dizziness would overtake you and at some point you’d fall, maybe even pass out. Or would you? What happened at that moment when you lost control? Was there a divide? Could you suspend that moment between conscious and unconscious? Would being in that place give you answers?

What Fiona has learned will save her life when we reach the finale. It is glorious. Empowering. And, believe it or not, it's believable. With all the subplots and many characters, the story reads smoothly and the plot unfolds inexorably.

Her two years come to an end, and she asks a haunting question: “How do you leave Africa? How do you get on a plane and just fly out of here, knowing you’ll never come back?”

Is there anything not to like in this book? Certainly. Fiona is immature and annoying in many ways, but she is believable and real, and she leaves quite an impression on this reader.

BUY THE BOOK! Read it asap!

An introduction to the peace corps by a dancer

I do not know a lot about the peace corps but through reading this book I began to learn what some of the work entail when you go to put in work in another country. I think that it takes a special work for such an organization because you are going to a different country where the language and culture is different from your own. The author shows her happiness to be going to Gabon, African to teach English but along the way she has hurdles and obstacles to overcome as a teacher and as a local in a country that is foreign to her but yet draws her in. Overall, it was a good read and from reading this I think a person would come to their own decision whether or not the Peace Corps would be for them.

Running from a difficult romantic drama into the arms of The Peace Corps in Africa may not have been the smartest move for Fiona Garvey. However, if growth and experiences differing from her upbringing are what she was seeking then she went to the right place. An engaging story with beautiful, descriptive scenes and food for the senses that kept me engrossed throughout the night. Loved it. Thanks Terez Mertes Rose for the reading pleasure. What a lovely name.

GOOD PLOT OF BEING IN AFRICA

A father saying get a job, enough with the dancing and changing careers. Joining thePeace Corp as an English teacher, was that the answer. No, six months later, but parents approved. The grit, the dirt, and a language one didn’t understand. A time for her personal growth, and experiencing being in the culture of Africa.

I was totally captivated by this lush and moving novel set in Gabon, Africa. The protagonist, a ballet dancer, takes a two-year assignment in the Peace Corps after a wrenching betrayal by her sister and the end of an important relationship. You’re deeply drawn into her story of spiritual and emotional growth in a country she describes in exquisite detail. A mystical, magical tale that will enchant and capture the reader long after the last page is turned. 5/5

Thanks to the author, Classical Girl Press and NetGalley for the review copy. Opinions are mine.