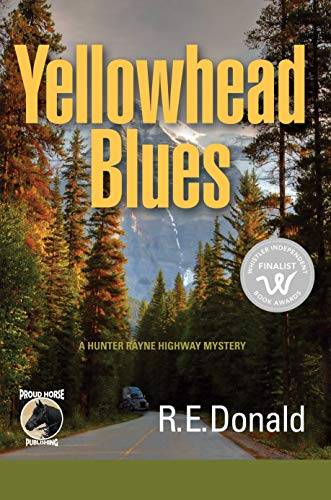 A finalist for the 2020 Whistler Independent Book Award!

Just west of the Rocky Mountains, a frightened horse with a bloody saddle is found running loose on the Yellowhead highway. Former RCMP investigator Hunter Rayne is on the road in his eighteen-wheeler when he’s flagged down to help calm the horse and find its missing rider.

The horse with the bloody saddle leads Hunter and a good-natured French Canadian cowboy into a complicated murder mystery. The police are none too happy with his interference, but Hunter strongly believes the RCMP has arrested the wrong man and sets out to uncover who stood to gain from the death of a wealthy ranch owner.

His belief in the suspect’s innocence is shared by a rookie female RCMP constable who joins him in the search for the truth. She befriends the dead man’s young fiancé in an effort to get answers, and discovers that the vulnerable Texas beauty is not who the victim's family believes her to be.

This is the fifth novel in a unique mystery series set on the highways of North America.

What readers are saying about the Highway Mysteries:

“Love the author's books. Excellent characters and settings. She is now on my short list of current favorite authors.”

“This series is beautifully researched, vividly written, and always captivating. It respects the nobility which resides in everyone while portraying some unforgettable characters.”

“… great writing, excellent pacing that sucks you in right away and makes you forget about the world around you, characters you like and who talk and act the way real people do, set in a place that makes it feel like an adventure, and best of all-- a wicked smart plot.”

“I love the way the main character, Hunter Rayne, thinks, interacts with people, and in general would put him into the lofty echelons with Adam Dalgliesh, Morse and the Hon. Det Lynley. Great and satisfying series.”

“Hunter is the man. Donald has written a super story that would make a good movie. I think we have another Harry Bosch character.”

A Spoiled Heiress For The Honest Bandit: A Clean Western Historical Romance Novel

Slip Out the Back Jack: A bone-chilling gritty serial killer thriller