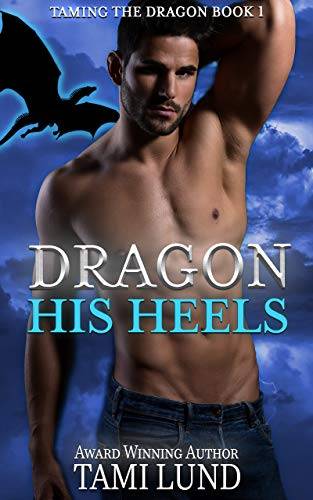 Gabriel Wilde is a reluctant dragon leader and now, a reluctant dad. SSince he doesn't know what the hell he's doing, he enlists the aid of his trustworthy (and admittedly hot) PR manager, Talia Tatsuya. Which is all fine and dandy until his dragon decides she's their fated mate. Damn it, Gabe doesn't want one of those, either. Taming the Dragon series:Dragon His HeelsHungry Like A DragonDragon In DenialBewitching the DragonLet Go My Gargoyle

I thought I would hate this book or at least DNF it because I’ve never been one for stories where kids are involved. It kills my romance vibe. Surprise surprise, this one had me rather hooked. Gabriel is definitely not the kind of guy that wants more responsibility than he already has and comes off as a playboy.

The rules of the clan are set out and the curse defined. I enjoyed how the author gave information without it feeling forced. Gabriel broke his mold and the questions at the end made me want to continue the series as pieces were revealed. I do wonder what could have been possible if those pieces had been revealed earlier in the story, though I see no issue with the pace as it was.

I was happy with the overall story and the HEA ending. Considering those unexpected facts makes me willing to read more shifter novels where there’s a father situation. Thanks to Ms. Lund for helping open my mind.

Such a good story! It has the right amount of tension and flows effortlessly.. It kept my attention the whole way through andnhad me rooting for characters and at a couple points brought a tear to my eyes.. Definitely good amd I hope there's more to the story!

Ms Lund is a new author to me. I very much enjoyed this book (could not put it dow). Looking forward to grabbing the next in the series. But not tonight, or should I say this morning. Lol

Yep. Just one hot Dragon. A one opps. And not the one your thinking of. His caught isn't a opps. But a gift given to jim. But fixing things with his mate . Well that is gonna take some talking.

Two dragons and a baby

Got sex scenes included. Paranormal curses and dragons also included. Downside of this story is how the author just skips through the fact that Thalia use a 5 year old to bring Gabe to heel.

The Duke and the Spitfire