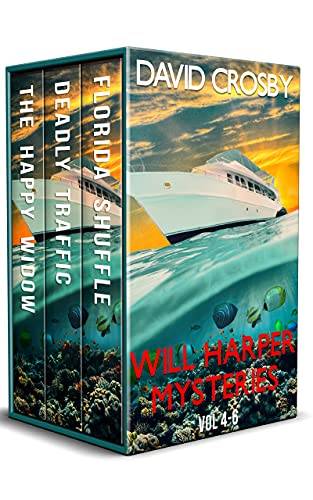 DARK DEEDS
IN THE SUNSHINE STATE
Investigative journalist Will Harper returns in this rollicking set of gritty Florida thrillers. A semi-retired reporter, Will spends most of his time on his live-in yacht exploring Florida’s lush, tropical waterways, navigating his treacherously overlapping love interests--and solving hard-boiled murder mysteries. In this latest box set, Will grapples with industry good ole’ boys, ruthless sex traffickers, and a smooth, French serial killer hellbent on murdering his wives. All the while writing titillating exposés on sober home scams, illegal immigration, and black widows. Equal parts gripping, action-packed thriller and empathetic rumination on Florida’s social issues, Will Harper’s adventures will appeal to big-hearted hard-boiled readers.FLORIDA BURNINGA toxic algae bloom in Lake Okeechobee that’s as thick as guacamole. A deadly pollutant from a cane field. And an environmentalist dead in a cane field fire. Coincidence? Florida PI Will Harper knows damn well it’s not.THE FLORIDA SHUFFLEWill Harper is living the dream aboard his yacht with his new live-in girlfriend Callie, a social worker at a rehab center. But it’s not all Florida coast sunsets and steak dinners on the boardwalk.Callie learns her employer has a history of setting clients up in shady sober homes in exchange for financial kickbacks—and one of those homes has lost three of its patients to “accidental” overdoses in the past four months. Turns out it’s just the tip of the iceberg.This mystery anthology is custom-made for Florida mystery connoisseurs, and the cherry on top is Will’s liveaboard trawler, harking straight back to the grand tradition of marina-living PIs like John D. McDonald’s Travis McGee and Randy Wayne White’s Doc Ford. Fans of classics like those and more recent Florida tales by Wayne Stinnett and Dawn McKenna will be thrilled to discover this tempting tropical series—but so will anyone looking for the kind of private investigator who really cares.DEADLY TRAFFICDavid Crosby’s fifth thriller kicks off when Will discovers that modern-day slavery has been operating in his own backyard. Will’s informant’s a Guatemalan immigrant who’s just escaped the elegant compound where she was enslaved as a maid. She’s on the run from hired goons who work for the sugar tycoon who held her captive, at the same time searching for her missing siblings.THE HAPPY WIDOWWhile trying to unmask scammers who target vulnerable elderly Floridians, Will risks angering homicidal con artists who will stop at nothing to extort their hapless victims.