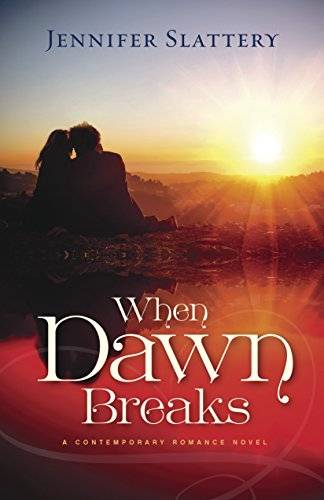 As the hurricane forces Jacqueline to evacuate, her need for purpose and restitution forces her to head north. North to where her estranged and embittered daughter lives. She needs reconciliation, but can she find it in time? Will her handsome new friend be someone she can lean on during the difficult days ahead or must she relinquish her chance at love again to find peace?
When Dawn Breaks is a contemporary romance novel filled with humor, romance, and intrigue, along with characters overcoming life’s obstacles and embracing hope. When Dawn Breaks provides readers a look at how middle-aged men and women dealing with real-life issues find hope and peace in God’s will for their lives. The characters will inspire readers to look for ways God can turn their greatest tragedies and failures into beautiful acts of love and grace. Be inspired to see how God longs to love and heal His children through other Christians.
Written by a Hurricane Katrina survivor, this novel is an excellent choice for book clubs as well as women’s Bible study discussion groups to encourage evaluation of one’s gifts and desires in light of God’s calling.

After a lifetime of disappointment and running after all the world has, Jacqueline has become a new creation in Christ. However, when she has to evacuate during a hurricane, the only place she can think to go is to her estranged daughter. Her daughter is the person she has wronged most in life. Her purpose becomes clear, that she must try to restore her relationship with her daughter. At the same time, she works at the church shelter for the hurricane victims where she meets three children. Another meeting with a man she just met at church, has her wondering what God has planned for her. Jacqueline remains open to God’s leading, and finds a future she could never have believed or imagined.

For a contemporary romance novel, the book goes beyond romance to deal with some very contemporary issues. Starting with a forced evacuation of the south Gulf Coast of Texas due to a hurricane, the story moves to a small city somewhere a few hours north. Jacqueline left Crystal Shores to escape the hurricane and chose Willow Valley because her estranged daughter lives there. Teresa, her three children, and the woman in the apartment next door end up in a church shelter in Willow Valley because they have nowhere else to go. Jonathan moved to Willow Valley from out west for a new job that is closer to his family as he prepares for retirement. Actually Teresa’s children are more integral to the story than she is since she abandoned them at the shelter to go find another man. Each of the main characters have their own share of issues to handle but the children are the most heartrending as they get shuffled into the system. Most of their story is shared from the perspective of Gavin, the fourteen-year-old son. Because of the mother’s poor choices, Gavin has been forced to look out for his younger sisters most of his life. His primary concern is to keep them together. As the story began, I kept wondering what all the different characters had to do with each other. The author did a great job of intertwining the lives of such a varied group of people to develop a very compelling story with a serious message to us all. I highly recommend this book, more for the message than the romance, although that aspect has its interesting moments. I found it fascinating that the lead character with the least experience in the Christian faith lived out her faith better than many real-life Christians.

This story was riveting. Once I got into the characters I was enthralled to find out what would happen and where it all would go. It was fun to see the separate stories converge into one. This is the first slattery book I've read but it won't be the last!

This story is well written. It is gut-wrenching at times. I held on to the thread of hope woven throughout this story. I enjoyed this story.

Jennifer Slattery's book is an awesome depiction of how God can take you through every day life circumstances while also using his sovereignty to maintain control during a tragedy.

The author has a refreshing voice and believable characters and situations.

This is the first book I've read by this author, but it won't be the last. Jennifer Slattery's characters are real with real problems and struggles. She gets inside each one's head to show the reader what motivates them,

When Jacqueline Dunn loses her home and property to a hurricane, she has no option but to move north and in with a daughter who has been hurt by her. There's bad blood between the two from Jacqueline's past mistake.

Jonathan Cohen. a widower, takes on a new job, but faces challenges when he discovers something underhanded going. If he squeals, he could lose his job. If he doesn't.... He must make up his mind whether to report what he's unveiled or to stay silent.

The last main character, 14-year-old Gavin, displaced by the hurricane, ends up at a shelter with his mom and two younger sisters. When his mom takes off, the children are moved from the shelter to foster homes. Gavin has a rough time of it. Despite his pleas to keep the trio together, no one will listen. Their story will tug at your heart.

At first I had to really concent to keep the many characters straight, but that's understandable with three stories going on at the same time. Ms. Slattery did a beautiful job of keeping me plugged in and turning pages.

I highly recommend this book. A true story of forgiveness and healing.

Three stories become one in a tale of heartache and struggle.

Jennifer Slattery opens When Dawn Breaks with three sagas only to weave them together into one triumphant romance.
Even as the hurricane rips at their homes, Jacqueline and Jonathan discover turmoil has followed them to Willow Valley. A cluster of abandoned children worm their way into Jacqueline’s heart and land squarely between the two’s growing love. In the meantime, the search goes on…for security, reconciliation, and family.
As always, I liked Jennifer’s writing style. It’s fluid and easy to read. Her book exposes the inadequacies of our society to deal with long term emergency situations as well as the pathetic state this nation has created with its “child protection” programs.
Whether it was the split storylines or slow start, the plot didn’t capture my interest until the last half of the book when the main characters (Jonathan, Jacqueline, and children) came together. Once that happened, Jennifer’s writing took hold, and I was hooked.
I give this book four stars for the themes and writing. The slow and distracting beginning keeps it from earning a five, it’s still an awesome story!
****New Hope Publishers provided me with a free copy of this book for a fair and honest review.

$999
We've got this price some time ago. Please check it's relevance by hitting button below.
Check Follow Book Read preview
Share with your network

Dragons in the Stars: A Novel of the Star Rigger Universe

Shot in the Dark

Jaguar: Memoirs of a Bad Girl