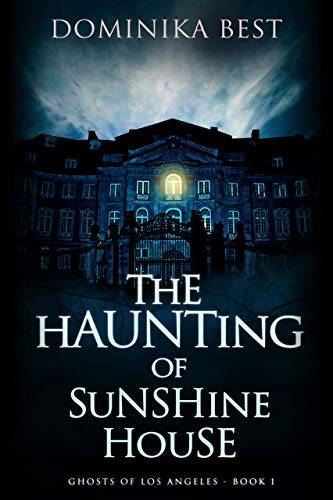 Is the evil lurking in Sunshine House human or something much worse?
Once an exclusive Hollywood hotel catering to the likes of Rudolf Valentino and other great stars of the Silent Film Era, the Bockerman Hotel now is the Sunshine House, an assisted living home for seniors.
And its residents are dying…in droves.
Sara Caine, paranormal investigator, couldn’t believe she got an invitation to hunt for ghosts in the most haunted building in all of Los Angeles, The Sunshine House. Her excitement turns to horror as the mysteries of Sunshine House reveal themselves to be more terrifying then she could have ever imagined.
The Haunting of Sunshine House is the first book in a creepy new Supernatural Suspense series that will have your spine tingling. If you like Darcy Coates, Amy Cross or Bill Thompson, then you’ll love The Haunting of Sunshine House by Dominika Best.
Buy yourself a copy, grab a hot cocoa and turn down the lights. You’re in for a thrilling ride with Sara Caine in The Haunting of Sunshine House.
Once you start, you won’t be able to put it down.

AUTHOR INTERVIEW:Where did your interest in ghost stories come from?When I was young and living in Poland, I lived next door to an old cemetery. It had been a Jewish Cemetery before World War II, and had been gated since 1945. No one had been inside in all those years, my child brain imagined. Our apartment was on the eleventh floor and I could see through the dense trees down to the half buried tombstones. I convinced myself I had seen several ghosts wandering there at night. My fascination with all things supernatural grew from there.
Is that the reason history plays such an important part in this series as well?Yes, absolutely. The ghosts of World War II were everywhere in Poland. You couldn’t escape that dark history. I’ve had a life-long fascination with that time period especially since the tendrils of the horrors still penetrate our modern times. Los Angeles also features prominently in this series. It is called Ghosts of Los Angeles after all. One of the reasons, I loved setting these books in Los Angeles is because of how steeped in history this city is. A different type of history, of course, but one that is stamped on the facades of the city. It’s wild to watch an old silent film and see the downtown streets and buildings prominently featured from that era. The ghosts of all the celluloid stars wander the streets here. On Rudolf Valentino’s birthday, the Hollywood Forever cemetery hosted a live viewing of one of his films on the side of his mausoleum. They had asked the last living organist from that time period to come and accompany that film. Only in Los Angeles.
What made you choose a psychic to be the main character in this series?As I was researching this book, I came across stories of Bess Houdini. She held seances on the roof of the Knickerbocker Hotel on every Halloween night for 10 years, trying to contact her husband Harry Houdini. I loved that intersection of the supernatural and the famous. I also met some psychics here that were the coolest ladies. They gave me some help in correctly writing about their world.
Who would like this novel?Anyone who loves a good mystery, wrapped in a creepy ghost story. Some good scares, and some familiar names making cameos. It's a book to get cozy with.
Ghost Suspense Horror Fiction Classics Occult Supernatural

Easy Self-Discipline: How to Resist Temptations, Build Good Habits, and Achieve Your Goals WITHOUT Will Power or Mental Toughness

Lions of the Desert: A True Story of WWII Heroes in North Africa