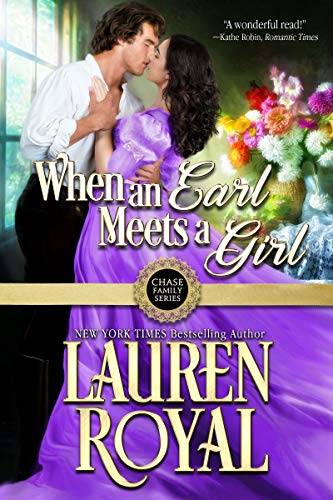 ♥  A nobleman and a common girl
♥  A close-knit, meddling family
♥  A trunkful of jewelry
♥  A dastardly kidnapping
♥  Steamy romance!From New York Times bestselling author Lauren Royal comes the first novel in her beloved series featuring the “outrageously funny, loyal, compassionate, and unconventional” Chase family.Descended from generations of jewelers, Amethyst Goldsmith loves her craft nearly as much as she loves her family. But she hates that her wedding is mere days away. Amy is promised to her father’s small-minded apprentice, the last man on earth she could ever love, honor, or especially obey. But the date is set, the dress is ordered, and there’s no way out—until the devastating Great Fire of 1666 sweeps through London, shattering her workaday world and recasting her fate…Colin Chase, the Earl of Greystone, doesn’t believe in fate. He believes in hard work and securing his family’s future, which means marrying the wealthy, high-born Lady Priscilla Snobs—er, Hobbs. When he rescues a lowly jeweler’s daughter from the inferno, he’s only taking pity on a broken young woman. But as the pieces begin to mend, Amy emerges. Beautiful, passionate, playful Amy, who maddeningly captures his family’s hearts. Soon Colin fears that if he lets his guard down for even a moment, he might find his own heart held hostage as well…Snowed in together at empty, crumbling Greystone Castle, an earl and a common girl can’t help surrendering to desire. But when the dream is over and reality catches up with them, can they find a way to make their two worlds one?PLEASE NOTE: This book was formerly titled “Amethyst.”Book DetailsA complete, standalone story—no cliffhangers!Series: Chase Family Series, Book 1
Style: Humorous historical romance
Length: 120,000 words (about 480 standard pages)
Bonus Material: Author’s Note, preview of next book, link to giveaway
R-rated Content: Steamy love scenes!** If you prefer to read Sweet & Clean (kisses only) romance, look for “The Earl’s Unsuitable Bride” by Lauren Royal & Devon Royal.Awards• Top 10 Bestseller on Amazon, Apple Books, Barnes & Noble, Google Play, and Kobo
• Nominated by Romantic Times for Best First Historical RomanceReviews“A captivating historical romance. Fans of Julia Quinn and Tessa Dare will love Lauren Royal!”
—Glynnis Campbell, USA Today Bestselling Author“A wonderful read! With a deft pen, Lauren Royal captures all the pageantry, excitement, and color that was Restoration England.”
—Romantic TimesConnecting BooksWhile When an Earl Meets a Girl can be read as a stand-alone novel, many readers enjoy reading it as part of a series. All of Lauren’s books feature Chase family members. Should you wish to read them in chronological order, this is the sequence:Chase Family Series
When an Earl Meets a Girl
How to Undress a Marquess
If You Dared to Love a Laird
A Duke’s Guide to Seducing His Bride
Never Doubt a Viscount
The Scandal of Lord Randal
A Gentleman’s Plot to Tie the Knot
A Secret Christmas
A Chase Family ChristmasChase Family Series: The Regency
Tempt Me at Midnight
Tempting Juliana
The Art of TemptationNew in 2021
Alice BetrothedSpecially Priced Boxed Sets
Chase Family Series: Collection One
Chase Family Series: Collection Two
Chase Family Series: The Regency Collection

Too Much Love to Hide