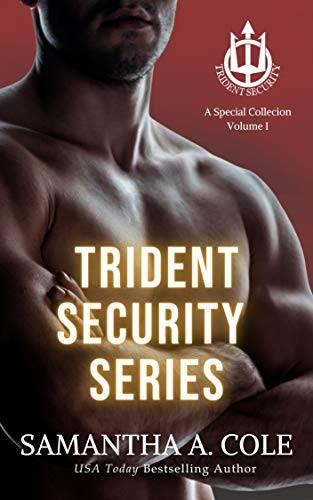 The "special collection" books of the Trident Security series include the original series and the stories from the multiple spinoff series in the order they should be read for maximum enjoyment.

Kristen needs inspiration and personal experience for a sequel to her unexpected and kinky bestseller. Devon, an ex-Navy SEAL and private club owner, is all too happy to help.

Soon, a single weekend of hot and dirty sex turns into something more. But while they fight their connection, a killer has Devon in his sights.

Will they survive with their hearts and lives intact?

Angie has been looking for Mr. Right, but all her dates have turned out to be Mr. Oh-so-wrong. Until she meets her new neighbor’s boss—tall, dark, and deliciously dominant.

When trouble knocks on Angie's front door, she puts her life in Ian's hands. His security team is determined to keep her alive at all costs, but when the smoke clears, will Angie walk out of Ian's life forever?

Thirty-six hours was all it took for eighteen-year-old Ben to go from being the happiest man alive to having his world fall apart.

Kat was his best friend’s sister and the only woman to ever hold the key to Ben’s heart. Then she and her family were gone in an instant, killed in a devastating accident.

Twelve years later, Kat emerges from the shadows of the Witness Protection Program, only to find the danger her father had placed them in still out there. The last thing she wants to do is put her high-school sweetheart in danger, but he's the only person she trusts with her life.

Working for a private-security firm, Ben is shocked when his evening appointment is a ghost from the past. He knows he can't refuse to help Kat, but when it's over he knows he’ll have to let her go; she deserves better than the man he's become.

Will Ben and Kat survive, or will he once again have to bury the only woman he's ever loved?

The books of the Trident Security Series can be read as stand-alones, however, for optimum enjoyment they are best read in order.

Listening Skills Training: How to Truly Listen, Understand, and Validate for Better and Deeper Connections