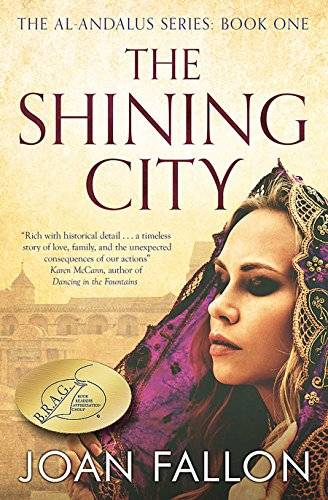 5.0 out of 5 stars
'Took me to another place / another time.' Darius Stransky

This is the story of a city, a city that is now in ruins: Madinat al Zahra.  The year is 947 AD, a time when southern Spain is under the rule of the Moors.  The ruler, Caliph al Rahman III is rich, powerful and cultured.  His lands are, at long last, at peace and the capital, Córdoba, is considered to be not only the most beautiful city in the civilised world but also the seat of learning and culture.  Against this background we meet the artisan Qasim - he and his family have moved to Madinat al Zahra to make their fortune as potters.

Qasim is a good husband and father.  He works hard, says his prayers and keeps out of trouble.  But Qasim has a secret; his past is not what it seems.  When a stranger arrives asking questions about him, he is worried that his secret will be discovered and everything he has worked for will be destroyed. He has to take action.

The Shining City is a BRAG Medallion honouree.

A refreshing new side of ancient times, with historical insights and learned how harems and concubine actually lived! Great read!

Addictive from the first page!!

I love the writing of this author. It is rich with images and smells and sounds, all depicting a time long gone and, for many like me, an unfamiliar culture. I was immediately drawn in and swept away by this story of lust, obsession, ambition, slavery, and family honour. It has all the makings of a great saga which I am loath to complete! It's just that good!!!!!!

This story is rich in description of life in Al-Andalus during the 9th century.

The culture, religion and lives of the characters are fully described as the author writes with fluidity and color.

The character Omar, now an old man, is looking back at his life as a young man living with his beloved family. He recounts the wrecklessness of his youth when he falls in love with the beautiful concubine of the sultan's harem. The consequences of his actions cause a domino effect that will change his, his family's and others indirectly.

This is a very well told story from differing aspects of the people involved. It is sometimes comical, but also very serious given the era and culture.

I loved reading this story as it took me away to another time and place while educating me. I believe readers of historical fiction might enjoy this as I did.

The family of a potter is effected when Omar falls in love with the haremgirl of the Caliph.
Very well written book. All the people fleshed out, lots of historical info.

We are proud to announce that THE SHINNING CITY by Joan Fallon is a B.R.A.G.Medallion Honoree. This tells a reader that this book is well worth their time and money!

Once, a Moorish ruler, the Khalifa Abd al-Rahman III, decided to build a brand-new city to shout to the world just how glorious and successful he was. These days, nothing but ruins remains of Madinat al-Zarah, which does not hinder Ms Fallon from presenting us with a vivid depiction of it at its heyday, back in the 10th century.
Since many years I have something of a fondness for books set in Moorish Spain and it was a pleasure to find myself so totally immersed in this distant past, brought to life in everything from scents to sounds and sights.
Other than the excellently depicted setting, Ms Fallon gives us a story of forbidden love and its consequences, and a sad story it is, with innocent bystanders paying the price for rash behaviour and youthful lusts. While both Omar and Isolde leave quite an impression, I am far more intrigued by the secondary characters – the ones obliged to deal with the fall-out, so to say. Ms Fallon presents us with several complex and well-developed characters, all the way from the might Khalifa himself to Omar’s baby sister, Layla, whose entire life is derailed by the events set in motion by Omar and the fair Isolde.
The Shining City is not a fast-paced read. Ms Fallon is a far more reflective writer, adding little coils of tension throughout her narrative. The end result is a book that is easy to read but hard to put down.

"I wasn’t sure if this book was for me, but I am so glad I read it. Looking forward to more books from this author."

"The book is beautifully written and kept me totally engaged. Congratulations"

Pauline Barclay
Founder of Chill with a Book Awards

Cowboy in Her Courtroom: A Sweet Contemporary Romantic Suspense