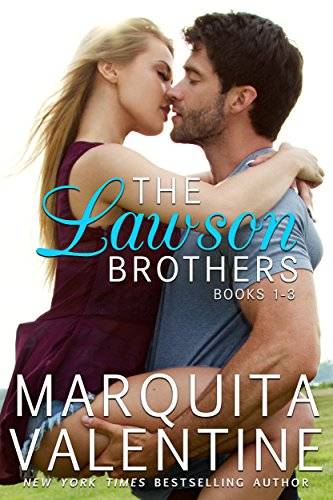 Box set of the first three books in the Bestselling Lawson Brothers series - Love So Hot, Love So True, and Love So Irresistible.

LOVE SO HOT
Bank Teller and all around good girl, Sydney McKnight, is tired of being the girl all the guys want to have as a friend. Who better to help unleash her inner vixen than her best friend and secret crush, Brody Lawson? Only, Sydney has no idea how to ask him, without their friendship going up in flames, until that is, the town of Jessamine's annual Firemen's Auction gives her the perfect excuse to set her plan into motion.

Fire Captain Brody Lawson has been in love with his best friend, Sydney, for years, but he would never risk their friendship by confessing his feelings to her. So, when Sydney beats out the competition to buy his time at the annual Firemen's Auction, Brody can hardly believe his luck until she asks him to teach her how to seduce a fellow fireman.

Now, it’s up to Brody to show Sydney how perfect she already is and convince her that the only man for her is him, because if Sydney is going to seduce any man, it’s going to be him. And once he has her in his bed, he’s not letting her go.

Love So True
Single mom, Bailey Yates, has had enough of bad boys to last her the next eighteen years. She’s always been a sucker for them, and Jessamine’s ultimate bad boy, Lucas Lawson, is no exception for her. So, when he returns to town, naturally she’s drawn to him. And naturally, she must avoid him at all costs—no matter how attracted she is to him. She’ll give him a job, and keep her distance…until Lucas saves her son from a hit and run.

Finally, Lucas Lawson is a free man. After serving five years in prison for embezzlement, he’s come home to Jessamine to right the wrongs he committed against his friends and family. But, it won’t be easy. For starters, the brother he’s looked up to his entire life wants nothing to do with him, and no one in town trusts Lucas enough to give him a chance to make amends. Until, Bailey Yates gives him a job at her family’s diner.

All former Navy SEAL Mason Lawson craves is solitude. Unfortunately, his new neighbor won’t allow him the peace he so desperately needs. Between the traffic and the music, Mason is constantly on edge—not exactly what the doctor ordered for someone recovering from a bullet to the leg. However, when he finally has enough and confronts his neighbor, nothing can prepare him for how hot he’d get for the teacher next door.

Love So Irresistible
Piano teacher Skylar Jernigan loves everything about the town of Jessamine—from the quaint Main Street shops to the people who own them. Unfortunately, once she’s chewed up and spit out by her sexy neighbor, Skylar begins to question her decision to move to a new town. Until, that is, she learns he’s suffering from a war wound and refuses to have anything to do with his family.

Now, Skylar is determined to help Mason recover—mentally, physically and socially—until he turns the tables and sets out to seduce Skylar right out of her meddling ways. Only seduction turns into something more and soon, Mason can’t stop looking for excuses to be with her. But when the Navy wants Mason to reenlist for a dangerous mission, will Skylar be too irresistible for him to leave?

More Books in the Lawson Brother series are available for purchase separately:
Love So Tempting
Love So Perfect
Love So Unexpected
Love So Right
Love So Wild

The Worth Series Boxed Set (Books 1-3)

Rogue Legacy: A Tale of Issalia (Runes of Issalia)