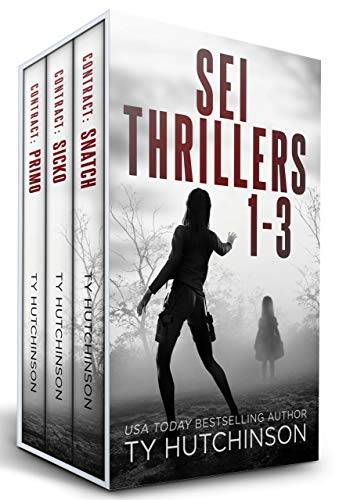 Two years ago, Sei buried her daughter. Two days ago, she found out she was alive.
The first three novels in a nail-biting series! Hundreds of thousands of downloads worldwide. 1,000s of five-star reviews.

Perfect for fans of Child, Archer, Flynn, and Silva.

Contract Snatch: After her daughter’s death, ex-assassin Sei fled to the Ardennes forests of Belgium to try to find peace. But a mysterious source contacts her, promising to return her daughter. Simply take on one last job: break a notorious assassin out of jail.

Contract Sicko: Sei learns about an individual involved in the abduction of her daughter—a man so vile, so foul in every way, that the mere thought of him turns Sei’s stomach. To complicate matters, Sei must befriend him.

Contract Primo: While searching for her daughter, Sei realizes there is still one person alive who can help. It won’t be an easy mission—this person has no reason to tell her what he knows. In fact, he’s behind the borders of a country that wants to see her dead.

What readers are saying:

★★★★★ I never thought I would be cheering on an assassin, but it's hard to not love this character.
★★★★★ I had fun trying to guess Sei's next move. I was never correct.
★★★★★ Hard to imagine how this author created a character so clever, intelligent, and gifted.
★★★★★ Drama, mystery, and a hard punch from the beginning.
★★★★★ Characterization is fantastic; story is engaging, and an excellent plot.
★★★★★ I love a book that reads like I've just watched an action movie.
★★★★★ Definitely a killing machine but with a moral compass.
★★★★★ A multifaceted character that draws sympathy.
★★★★★ Love, Love, Love this series.

Start a series you won't ever want to put down. They used her daughter as bait. They messed with the wrong assassin.