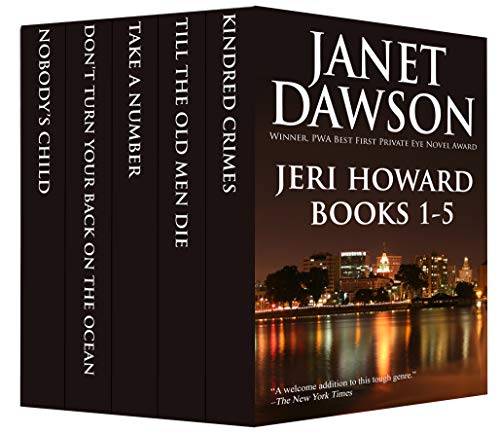 The first five AWARD-WINNING Jeri Howard murder mysteries are now available at an unbelievable bargain!Tough-as-nails Oakland PI Jeri Howard made a splash in Janet Dawson’s first book, winning Best First PI Novel from the Private Eye Writers of America. The next four mysteries only get more enticing!“A welcome addition to this tough genre.” -The New York Times Book ReviewDawson’s Oakland is noir and brooding, while Jeri’s as savvy as Sam Spade, with something of Spade’s seen-it-all outlook."Jeri combines V.I.'s social conscience with Kinsey's badass attitude and a snappy narrative voice..." -Maureen Corrigan, Washington Post Book WorldReaders who tear through offbeat detective novels featuring hard-boiled women sleuths will flip for Jeri Howard, especially if they enjoy Sue Grafton, Robert Dugoni, T.R. Ragan, Marcia Muller, and Sara Paretsky. The first half of this unforgettable series has never been on sale at a price like this! KINDRED CRIMESA puzzling missing persons case--a wife who disappears with the grocery money--keeps winding backward, revealing brand new secrets as fast as ancient skeletons can fall out of closets.

TILL THE OLD MEN DIEThe grisly murder of a sedate, widowed history professor, is written off as a random street crime until a woman turns up at his university, claiming to be his widow and demanding access to his "papers." TAKE A NUMBEROut of loyalty to a former client, Jeri takes on a nasty divorce case. The soon-to-be ex-husband winds up with a bullet in his back, and the prime suspect is Jeri's client. DON'T TURN YOUR BACK ON THE OCEANJeri is looking to catch a respite from the PI life to relax and visit family in lovely Monterey on the California coast. Now, what's the worst thing that could happen on a PI's vacation? A dead body on the beach, most likely. NOBODY'S CHILDIs a Jane Doe uncovered at a construction site the body of her client's long-lost daughter Maureen? If so, what's become of Maureen's two-year-old daughter?

An Alien Rescue: A Sci-Fi Romance

Never Dance with a Duke: A Regency Romance