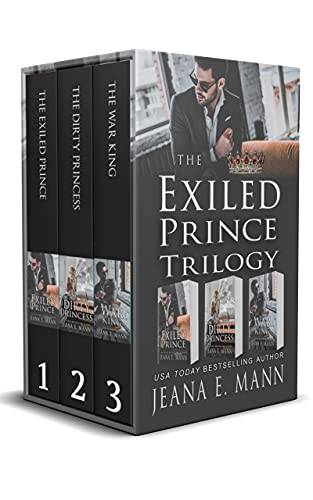 A secret masquerade hookup leads to complications with Rourke’s new boss. One night. No names. No faces. It should have been simple. Instead, she’s tossed into a life filled with decadence, heat, and sinful surprises.

Delve into the dark side of romance with an exiled prince, a secret masquerade ball, and all the complications they create for personal assistant Rourke Donahue.

A personal assistant marries her royal boss and learns that happily-ever-after only exists in fairy tales.

When Roman Menshikov asks Rourke to marry him, she doesn’t think twice. Once the ring is on her finger, she finds out he’s not the man she thought he was. He’s darker and more dangerous than she suspected. His involvement in an international war might kill them both. With wealth and power comes great responsibility for Roman. He’s determined to save his country from ruin but will he sacrifice his new wife in the process?

A fairytale marriage enters the battlefield when the exiled prince reveals his secrets and claims his throne as The War King.

I married the man of my dreams and landed in a nightmare of secret government agencies, assassins, and military coups. To keep him, I must fight his enemies. To love him, I must tame my fears. He’s not the man I thought he was. He’s more.

This was the first time reading this author. The first book centers around Roman meeting Roucke and getting his daughter back and can they work together and try not to show feelings for each other.
The second is about them being together and having to many secrets between them and can their love story make it. (Interesting side note the daughter not really brought up in this book)
The third book there are so many secrets and twists and turns and then it’s like the author needs to wrap it up. Still no sign of the daughter.
But if you’re looking for interesting characters and great chemistry between them hen this series is for you.

Lack of good grammar and poor proofreading can truly derail a story. If an author is going to take the time to write a story, with the expectation that I'm going to read and enjoy that story, then they should take enough pride in their work to proofread it prior to publishing. After trudging through these three, there is no way that I want to invest my time in any more from this author.

Rourke is the personal assistant to her best friend Everly. That is until Everly runs off to get married. But as her friends last outing as a non married woman puts Rourke in a difficult position. Wanting to go to an exclusive masquerade ball that is invite only and Rourke doesn't have a ticket leaves them scrambling. But it works and that is where she meets him. The tall, mysterious man. I enjoyed this book. It just seemed to be missing something.

A good story that falls flat at the conclusion

This started out very good with great, heated chemistry between the protagonists. Rourke and Roman are both strong, stubborn characters, and the way in which they clash and hold their ground against each other is a big part of what makes this a good story. There's a nice buildup through the first two books and into the third. It becomes more than a romance, moving into some mystery and shady dealings. However, where this fails is that the conclusion is rushed, never really resolving some of the issues, but merely skimming over them. I felt as though the author got tired of writing this story.

IMO, this could have been 4 or 5 stars with a better written conclusion.

Never a dull moment during my reading these books . Kept me up way into the early morning hours .

THE EXCITED PRINCE
What a way to start Roman and Rourke story. Who could have known a Private Masquerade Party would bring a Prince into Rourkes life and he has turned in upside down the righted it back. It's a whirlwind wind of PUSH and PULl but such a delicious story

THE DIRTY PRINCESS
Wow this story keeps you on your toes. So many twist and turns. Will Rourke and Roman marriage survive the lies and secrets.

THE WAR KING
Wow what a way to end this Trilogy. You get all the answers to the question about the truth behind Roman's empire, the people trying to bring Roman down and you get to see what true love and devotion really looks like. AMAZING.