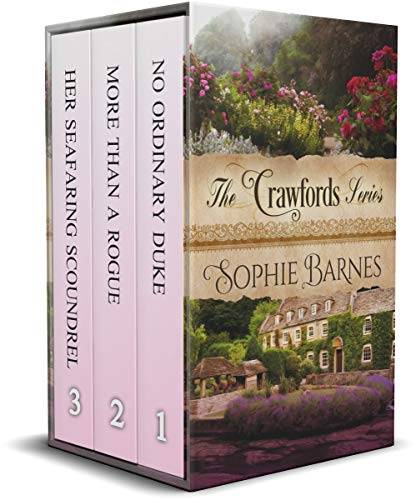 Allow yourself to be swept away to a bygone era…

Returning to England after ten years abroad, Caleb Crawford learns he's the new Duke of Camberly. Only he doesn't want the title. He'd rather help three spinsters fix a leaky roof. Disguised as a laborer, he falls for Mary and she returns his affection. Until she learns that he's more than he seems and that she's in danger of getting hurt.

More than a Rogue

With a broken engagement behind her, Emily Howard knows she's destined to be a spinster. Nevertheless, it might still be nice to learn about kissing. But when she's discovered in the arms of Griffin Crawford, she flees to save not only him but her very own heart. Because in her experience, dreams don't come true. Do they?

Lady Cassandra has no desire to marry. But when Captain Devlin Crawford brings scandal to her doorstep and offers salvation, she cannot say no. Not with her daughter’s future at stake. So she decides to accept Devlin’s offer, provided he agrees to never be intimate with her. For although Cassandra is drawn to Devlin, she refuses to dishonor the memory of her one true love.

If you love independent heroines and heroes willing to go to the ends of the earth for them, you'll love this series!