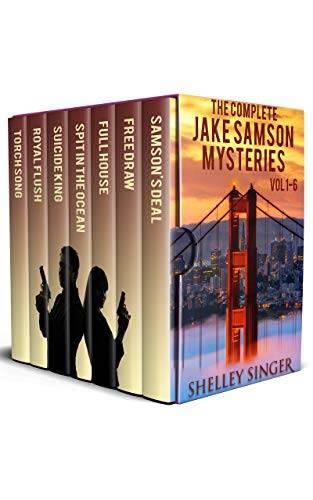 All six wonderfully wry and witty Bay Area adventures of Jake Samson and Rosie Vicente in one handy box set—PLUS A BONUS BOOK!
“Singer has a good ear for dialogue among the witless …” -San Francisco Bay Guardian
NICE JEWISH COP TURNS PI...
Ex-Chicago-cop (now unlicensed PI) Jake Samson is living the life of “an urban gentleman farmer” in laid-back Oakland, California, occasionally “handling discreet matters” to keep his cats, Tigris and Euphrates, in kitty treats.
His lesbian BFF, Rosie the carpenter, and her justice-dispensing two-by-four are the perfect complements to his relaxed casual style – no room for macho posturing with this crew! Readers will love their easy, breezy relationship, and wish they had a friend like either one of them.
WHO WILL LIKE Jake and Rosie: Fans of Parnell Hall's Stanley Hastings series, Tony Dunbar's Tubby Dubonnet series, Bill Pronzini's "Nameless" Detective series, Marcia Muller's Sharon McCone series, Susan Dunlap's Jill Smith series, Julie Smith's Rebecca Schwartz series ... and vintage TV series like COLUMBO, THE ROCKFORD FILES, HARRY O, MAGNUM, and HAWAII FIVE-O. Also LGBT fans!
TORCH SONG’s post-apocalyptic kick-ass heroine will particularly appeal to LGBT readers, young adults, and people of all ages who never met a dystopian thriller they didn't love.

SAMSON'S DEAL
When an acquaintance is the primary suspect in his wife’s murder, Jake and Rosie go inside a radical right wing activist group to which the wife is connected. An assortment of Berkeley kooks and interesting plot twists keep things hopping till the very end.
FREE DRAW
Jake’s buddy and quasi-boss calls in a favor when his nephew is accused of murder. It's up to Jake and Rosie to find the real killer, and they've got a number of suspects: the victim's fellow executives at a questionable correspondence school, his divided and bitter family, and his quirky Marin County neighbors--a truly odd assortment of California woods dwellers.
FULL HOUSE
An ark in the middle of suburban Oakland is interesting but not strange by California standards. Even one built by peaceful cultists preparing for the coming flood. Until sometime private eye Jake Samson is hired to find Noah, their leader, who has disappeared with a lovely devotee and a quarter million in cash. The cult suspects foul play, but the police aren’t convinced.
SPIT IN THE OCEAN
The North Coast Sperm Bank in tiny Wheeler, California has been knocked over, and the perp’s tossed its assets in the ocean, leaving a religious-nut note of explanation. Just a prank, says Wheeler law enforcement. But the bank hires Jake Samson and his ever-sharp Watson, Rosie Vicente to find out who made the unauthorized withdrawal. As a storm brutalizes Wheeler, a bank employee slips in the mud and falls to her death.
SUICIDE KING
Jake's never been a big fan of politics, but Rosie invites him to a posh California fundraiser for an energetic gubernatorial candidate of the liberal underdog Vivo party, and Jake can't resist. It's all fun and political games until the candidate’s aide finds her boss in her backyard, hanging naked from an acacia tree. The police rule the death a suicide, but Jake and the aide suspect foul play, and she hires Jake to find the culprit. He finds campaign shenanigans, affairs, a possible German mafia connection, and more danger than our hero could possibly have imagined.
ROYAL FLUSH
Laid-back, unlicensed PI Jake Samson is understandably nervous about infiltrating a local Marin County neo-Nazi group called the Aryan Command.
Private Investigator Mysteries Mystery Anthologies

Your Life Is Designed to Work: A Psychological and Spiritual Guide

King: A World of Tease Novel