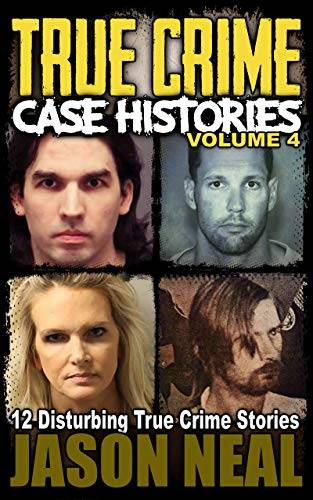 12 True Crime Stories of Murder & MayhemFourth Book of the True Crime Case Histories Series (2020)If you’ve read the previous volumes of the True Crime Case Histories series, you know that I like to start with a brief word of warning. The stories included in this book are truly depraved and shocking. They are not for the squeamish. Many true crime television shows and news articles often leave out the gruesome details, simply because they may be too much for the average viewer or reader. With my books, I try not to leave out the details no matter how vicious they may have been. My intention is not to shock, but to provide a clear and accurate description of some of the most evil minds of the world. Though the stories are brief, I do my best to include enough detail so that the reader can get a better look into the demented mind of the killer.

This volume features twelve of the most incomprehensible stories of the last sixty years. Trying to understand the motivation behind murders like these can be an exercise in futility. But one thing is for sure, — the stories in this volume will keep you turning pages.

In this book you’ll learn about a story that has haunted me since I was a little kid growing up in southwest Washington. I lived a normal American life where I could ride my bike around my small town from dusk till dawn without a care in the world. When I was twelve years old, a boy in my neighborhood just a year older than myself disappeared and was later found murdered. At the time I didn’t know many of the details, but after researching the story all these years later and realizing that monsters like Tommy Ragan.

A sampling of the additional stories include:

The Broomstick Killer: The Texas Penal System failed to protect the people of Texas by releasing a brutal killer of three teenagers. As a result he killed as many as eleven more women.

Body in the Bag: A young man obsessed with the macabre listened to the voices in his head when his teenage girlfriend dumped him. Authorities found her eight weeks later stuffed inside a duffel bag.

The Copper Gulch Killer: A sixteen-year-old prodigy child is found with five gunshots from three different guns, but police are convinced there was only one killer. Ten years later crime scene evidence is found in an abandoned storage locker.

Zack and Addie: A young New Orleans couple are featured in the New York Times when they refused to leave their French Quarter home during Hurricane Katrina. One year later they're both dead with body parts found on the stove and in the fridge.

The Incest Killer: Katie Fusco learned she she was adopted when she was eighteen. Within a year she was married to her biological father and pregnant with his child. When authorities force them apart, everybody dies.

The Kicevo Monster: The story of the newspaper reporter that kidnapped, tortured, and butchered women that resembled his mother, then wrote stories of the killings in his newspaper articles.

The stories in this volume are revolting and disconcerting, but they’re true. These things really happen in the world. Though we will never fully understand the criminal mind, at least we can be better informed.

Scroll up to get your copy

The people in this world ..ugh. I read this book and am just amazed at the stories that I've never heard of or have seen on i.d. Channel. It's so hard to understand the damaged brains that some people possess. In response to the authors request for the gruesome tales being toned down. I don't think That's a good idea as people should be more aware of the risks and indicators that lead to these crimes. Though sometimes there are none. As well as what fate they could prevent by being more aware. I meet strangers constantly in my vacation state. I notice how gullible they are. You know them for 2 minutes and they say things like, " hey want to take a ride to my friends home i nS.C , she lives in the woods and she's a millionare, on it'll be fun! I reply: you don't even know me , I could be a whackjob. Or..you could be a serial killer. The crimes are gory and brutal and my heart hurts for what the victims endured . I think we owe it to them to say a prayer and acknowledge their pain and terror. May they r.i.p.

That's enough for me.

Over 4hrs of gruesome crime details. This makes 3 of these books I have listened to. Speaking for myself, at this point it just seems to have become "more of the same."

Another fascinating book on murders

Easy, quick read, true stories of people who murder for various reasons. Mr Neal has written several of these books, all of which are interesting

Not to be read at alone at night…

I found this book absolutly fascinating. This is the first book I've read of Mr. Jason's, and I'll definitely be reading more.
BUT BEWARE!!! THIS BOOK GOES INTO EVERY DISTURBING DETAIL!!!! THIS. IS. NOT. FOR. THE. SQUEAMISH .
Read on if you love true crime. These are some lesser-known cases, not the ones everybodies heard of like Jack the Ripped and such. Promise, worth each cent.

Stories of some not-so-nice people who also are disgusting humans. Enjoyed very much; however, it was very difficult to keep track of which I have read and not read. Maybe you could put some identity on the cover of each book ( i.e. Volume 1, Volume 2, etc.)I

Clear facts that blow your mind

I've read volumes 1-4 now, and I STILL can't figure out what makes the human mind so twisted in SO many people! Jason Neal brings these cases to us in easy to follow stories. The facts are clear and as I said, will blow your mind. Perhaps that is why I just can't put the book down once I pick it up! I am just fascinated by these true crimes and how they were solved. I just grieve for the victims and the pure horror they were put through at the hands of someone else.

Out of the Dark