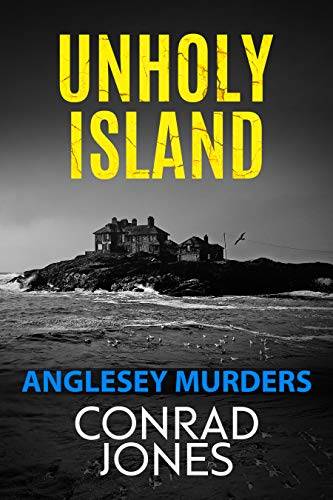 ★★★★★ The first of the Anglesey Murders novels. One of the best series you will read..If you like gripping and violent, then Conrad Jones will enthrall you.
★★★★★ Outstanding!
★★★★★ A powerful and gritty read, not for the faint hearted.
★★★★★ The Anglesey Murders and Anglesey Mysteries Series are THE must-read thriller series of 2021
★★★★★ Discover the explosive, unmissable and best-selling Anglesey series today.
★★★★★ "This is the most gripping thriller I have read in the last 10 years. A serial killer is serving life but a new wave of murders begins, with startling similarities. This author is up there with the UK's best offerings. I can't believe it's free on kindle unlimited! "
★★★★★ "Couldn't put this down. Fast-paced from the beginning. Get your tissues out for this one."
★★★★★ "An impressive series. This author has 24 best selling novels. This shows the flexibility of his storytelling.One of the best books you will read this year..Outstanding! A powerful and emotional read. The Anglesey Murders Series is THE must-read thriller of 2020. BOOK 1 in the series. DI Alan Williams is called to the recovery of two bodies from the sea at Trearddur Bay, during a storm. The lifeboat crew suspect they're fishermen, washed away by a wave but they’re wrong. Alan and his detective sergeant, Kim Davies, realise the men were beaten and tied together before they entered the water. Two miles along the headland at Porth Dafarch, a third victim is found but there are no obvious links. As the number of victims increases, a major investigation team battles to unravel a deadly puzzle which, appears to have links to a series of historic murders from the 90’s. In 1995, Peter Moore owned and operated the cinema in Holyhead. It is thought he assaulted over 40 men and he was arrested and charged with four murders, which he’d committed in as many months. He was jailed for life in 1996 and is still the only recorded Welsh serial killer. Fast forward to today and Detective Inspector Alan Williams is investigating a series of murders with uncanny similarities to the Peter Moore attacks. Is there a copycat on the loose or are the murders connected to the local underworld, which controls the supply of narcotics across North Wales and the North West? Finding a motive, is the challenge he might not win. ALL THE TIME THEY’RE TRACKING THE KILLER, THE KILLER IS STALKING THEM…

WHAT READERS ARE SAYING ABOUT CONRAD JONES "If you’re looking for something to open your eyes, break your heart, and look to take action to promote change, start with The Journey." Tiffany Hall - Beyond The Stars "I have never read a book before where I have had to stop reading because I couldn’t cope with the emotions the book engendered in me but the author writes so powerfully that I HAD to finish it." Joanna Lanum - Guest Reviewer "Such an intense, chilling and eye-opening novel which is guaranteed to leave you utterly speechless." Kaisha Holloway - The Writing Garnet "The plot line is superb and the characters are brilliant and really help carry the story forward." Donna Maguire - Donnas Book Blog "It had me captivated until the end. An easy, fast-paced read!" Gemma Myers - Between The Pages Book Club

$422
We've got this price some time ago. Please check it's relevance by hitting button below.
Check Follow Book Read preview
Share with your network

Then Home I'll Be

Stephen Hawking: A Life From Beginning to End