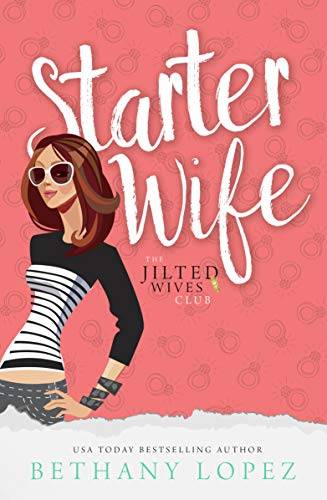 USA Today Bestselling Author Bethany Lopez brings you an all-new trilogy about getting a second chance at love. Follow Whitney, Summer, and Margo as they experience the good, bad, and ugly of dating again in your thirties and forties. Join them in The Jilted Wives Club.When life gives you lemons, make a Lemontini… Divorced and jobless at forty-something, Whitney never thought she’d be starting over. But here she is. Single and (not so) ready to mingle - with anyone except him. Luca leads a charmed life. He's got the perfect job, the support of a big Italian family, and a bevy of women eager to grant his mother’s wish for grandchildren… except the woman he really wants. Now that Whitney’s Starter Wife days are over, Luca is determined to convince her to give him a shot.Too bad the only shot Whitney’s sure of right now is the Lemontini.
City Life Fiction Humor & Satire Fiction Later in Life Romance

Loved this book. These three ladies Margo, Whit and Summer are were left by husbands. They founded their own therapy group Jilted Wives Club. I'm not a divorcee but I could have fun with these ladies.
Whit meets Luca at a restaurant. He finds out she started working for his dad's firm. She deals with her feelings from her divorce as things heat up in her love life.
Can't wait for Summer's book.

Well written story and well developed characters! I was hooked from the first to the last! I couldn't put it down!

This rom-com delight started with a bang and basically did not let go. Three women who find themselves in a place in their lives they never saw coming develop a friendship of epic proportions...and they take us, the readers, along for the gut-busting ride.

Whitney's ego, trust, and basically her world took a drastic hit when the man she loved for 25 years ditched her for a much younger woman. It was a sucker punch she never saw coming. Finally over the "wallowing in despair and Ben & Jerry's" stage, she's rebuilding her life one brick at a time. But when the stunning and smart Luca shows an interest, those bricks become a wall to keep him out.

The sense of humor found in this cast of characters is loads of fun. This is a great mood-lifting romance with all the feels, fiery passion, and lots of heart. I'll be reading the rest of The Jilted Wives Club books as well.

Never thought of myself that way, but I guess I might have been. What a sweet romance. I loved the way she and her new friends met and formed the jilted wives club.

This is the first book in this series. Whitney had been married for twenty years but it ended with her husband cheating. Now she is back out in the work force trying to adapt to her single life. Lucas is about to met the woman who will make him give up his bachelor ways. The only thing is she is older than him. Can this age gap be too much angst for them? Or is it the start of something lasting?

a new author for me

Older and starting over

The perfect beach (or anywhere, anytime) read. Starting over when you thought you knew how life would go is not what Whitney expected after 20 years of marriage. Out for a drink with a friend, Luca is not expecting to feel an instant attraction to someone there.

The Jilted Wives Club is the beginning of the series involving three strangers that connect and bond after walking out of a support group. Whitney is the first to find a second chance and I can't wait to see what happens for the other two. They are such a mix of personalities.

I loved that this has dual POV's and was glad to see Luca a little insecure at times, it made him a more believable character. I loved that he pursued the spark he felt and didn't give up on Whitney.

Great start to the series!

Whitney Spaulding is a recently divorced woman who is trying to start over. She ended up in a support group for divorced women but found it too stifling. Instead, she bumps into two other women in the same situation as her - trying to move on and finding their "one" or the "one-right-now." Whitney and her friends later form the Jilted Wives Club and support each other as this series starts.

Luca Russo is a young man who caught sight of Whitney as a bar as he was with co-workers and approached her to introduce himself. Whitney shot him down. The scene was cute since it did not feel like a "no" but more as a "not now," so I believed that Luca knew deep down that he would see her again.

Starter Wife is not my first time reading this author's works. I love this author's books - random in genre, topics, and characters. The book is easy to read and relatable to second chance genre readers. The POV is from Whitney and Luca's. The two main characters balanced each other well, but Whitneys and Luca's friends and family provided stability for these main characters to fall and support them as they try their best to sort out their relationship.

Luca's been with women, but nothing serious came about from them. No one good enough to be brought to meet his parents until Whitney came into his life - complicating it but in a fun and new way. He saw something in Whitney that was different from the rest of the women he knows.

I love Whitney a lot. She is a brave character, willing (or unconsciously) to leap with Luca when his persistence paid off. She looks composed and "put-together" outside, but there was so much brewing inside her. There were many unanswered questions on what happened to her failed marriage, and it was until the very end when things imploded when "giant leaps" were happening between her and Luca that she had to face truths and confessions that she tried her best to avoid.

Bottom line, I love rational yet sometimes flawed characters in Starter Wife. The author demonstrated the growth and maturity of two unlikely people that would become a couple successfully. This book is so easy to love, and I indeed fell for it "hook-line-and-sinker" to want to continue with the series. Readers will appreciate the easy flow of the story, including the conflict that will leave readers in a happy state of mind in the end.

I enjoyed this light story about divorce recovery and finding love again. There was humor and likable characters in this book, a perfect beach read.

This book was a slap dash writing job. Editors missed when husband’s new wife is referred to by the wrong name. But mostly my problem is with the lack of relationship development among any of the characters.

Whitney has no friends of her own when she divorces after 20 years, which doesn’t speak well of her ability to make and keep friends in her life; however she “bumps”into two new women and after one night of drinking together they are her “BFFS”.

The most glaring lack of relationship development, however, is that she hooks up with a guy 13 years her junior, and at one point he mentions marrying and having kids to come into the family business, and the two of them never discuss that aspect of their relationship. It seems inconceivable that two, supposedly mature adults, heading into a serious relationship, do not ever discuss the elephant in the room- the age difference. Surely someone needs to address that fact. I’m not saying that the plot is off the mark, simply that if the age difference is going to be a plot device, then address it to show a deepening of the mature understanding of what compromises that relationship will entail. The book focuses too much on the sex and not enough on the actual emotional journey the couple needs to travel.

I’m also put off by a supposedly mature woman sharing the details about her intimate relationship with casual friends. Sounds more like bedpost notches.

And the relationship with the cheating ex-husband is very superficial. Whitney talks about how devastated she was, but has a 5 paragraph discussion with him and everything is just fine. That’s just not real

My suggestion to the author is to think through her plots more carefully, and to take the time to develop real characters and real relationships which make sense in the context of her story .

The Rancher takes his Convenient Bride: a Sweet Marriage of Convenience Western Romance

Darkbeam Part I: A Dragonian Series Novel: The Rubicon's Story