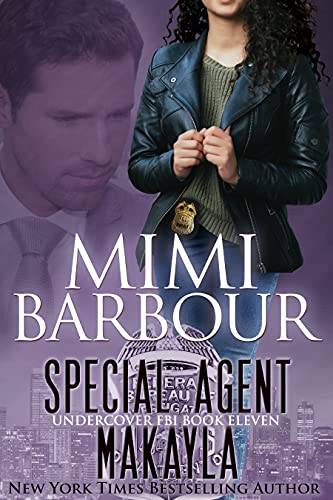 Only Makayla hears the cries of children in trouble.

People don’t understand, and it’s complicated for Special Agent Makayla to explain. In her mind, she doesn’t have special powers. It’s just fallout from the days when she was blind… before the operation that restored her sight. Back then, she’d learned to use her other senses, rely on her instincts, and listen intensely. Except her uncanny ability is beyond reason.
Because of her gift, she works with the Special Victims Unit and takes on all the cases of vanishing kids where the usual processes haven’t worked. Sickened by many of her assignments, she finds joy when she sees the kids free and healing. Her biggest stress… they just keep on disappearing.

Dean Andrews desperately needs help. His nine-year-old niece has gone missing and the only person he’s told that can save her is a kook who mysteriously hears the cries of terrified children. How can he put his trust in this wild-haired woman with striking eyes and a heart bigger than her tiny body?
Yet, he has no other choice. His sister begs him to find her little girl… and he promises. Now he must deliver. Time is running out and everywhere he’s turned leads to yet another dead end.
Working as a team, they hunt the dark web, become involved in porn webcam sites, and do whatever is necessary to find his niece before she’s lost forever.

Special Agent Francesca – Undercover FBI Series Book #1 This special agent flies her own plane, drives like a maniac & approaches a father who never knew she existed. Nothing scares her, except for one thing… MEN.

Special Agent Finnegan – Undercover FBI Series Book #2 Finn’s a cop who adores his quirky dad. He knows this soft core leaves him vulnerable, so when he meets his new partner, the thought of her in danger drives him crazy.

Special Agent Kandice – Undercover FBI Book 4 Kandice wants to be tough like the others on her team. Being the chief hostage negotiator at a bank heist starts the process. Being stalked, kidnapped and beaten helps see it through. In the end, pulling the trigger comes easy…

Special Agent Booker – Undercover FBI Book #5 Sloan Booker has multiple quirky dads & a vehicle restoration shop that keeps him away from his job as an FBI agent. When terrorists threaten his neighborhood, he’s back in the game.

Special Agent Charli - Undercover FBI Book #6 Charli’s stressed to the max from a case that went down badly. So why does fate stick her with a teen who sees a murder and will only go into witness protection if her bodyguard is Charli?

Special Agent Murphy – Undercover FBI Book #8 Murphy is the one cop women love to be near and men feel the need to compete against.

Special Agent Sophia – Undercover FBI Book #9 Sophia can go to Greece and rescue the governor's twins, but can she save a young girl from dangerous traffickers?

Special Agent Hunter – Undercover FBI Book #10 Hunter is after a cold-case killer who’s started up his nasty tricks again, and Detective Cora Taylor is the perfect woman to assist him, along with Sam – the biggest, ugliest dog alive.

Special Agent Makayla – Undercover FBI Book #11 Makayla hears the cries of children and works for the SVU to search for missing kids. Dean needs her help when his niece disappears in the dead of night.

This series is the best and boy was it worth the wait. When special agent makayla was a kid and got struck by lightning she list her sight but gained more from her other senses. When a man comes to her and begs to help him find his neice she accepts but along the way they are finding more and more about this kidnapping ring and themselves.

Excellent add to the series

Love this series and this is a great entry. Lots of drama and action little romance and humor to keep you interest

Special Agent Makayla (Undercover FBI Book 11) by Mimi Barbour is a fantastic read. This is book number eleven in this fantastic series that I have loved reading. I highly recommend this story to everyone who loves reading about mystery.

I received a free copy of this book via Hidden Gems and am voluntarily leaving a review.

Makayla's background and her past gives her a possession of a special, magical ability that makes her a fantastic agent find and protect children's lives. This story is overwhelming, full of twist, interesting and intriguing storyline. Fast paced and addictive filled with a lot of suspense, romance and passion. The chemistry between Makayla and Dean their need for each other, and the mission that overwhelmed them both to find Dean's niece. A great read with a very special ending that is so satisfying.

I throughly enjoyed reading this book. Once I started I couldn’t put it down. I loved the plot. It was well developed. I loved the small aspect of paranormal in how she found the missing children. I loved Makayla and Dean together. Their chemistry was amazing and the slow burning build up made it even better. I can’t wait to read the other 10 books in this series.

I voluntarily read and reviewed an advance copy of this book for Hidden Gems.

First book I a have read

This is the first book that I have read by this author and in the series. I totally loved it. I will be going back and start at the beginning. I received a copy of this book and I am voluntarily leaving a honest review.

I absolutely love the Undercover FBI books and this one is no exception. Due to a childhood illness, Makayla has the special ability to hear the cries of children in need of help, which puts her in high demand for child abduction cases which leave her emotionally wrung out. Dean is a private investigator who doesn't buy into Makayla's abilities, but he is willing to put his skepticism aside and ask for her help in finding his missing niece. Makayla is drawn to the case and to Dean. As they search for his niece, the case takes many twists involving a troubled teen that Makayla has helped in the past.
I loved the chemistry between Makayla and Dean as well as his willingness to put aside his disbelief and trust in her. I can't wait for more books in this series!

I really liked this story and the characters. I found it to be fast paced and I was engaged from start to finish. I look forward to more by this author