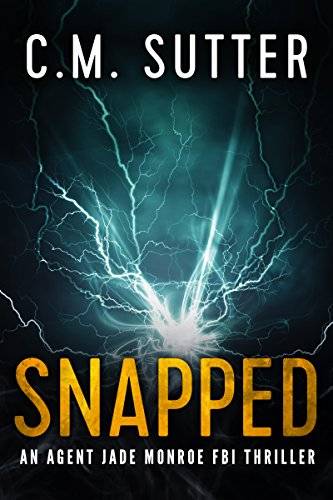 A half million readers can't be wrong! Fans of James Patterson and David Baldacci will love C.M. Sutter.
Snap up this first book in the unputdownable FBI Agent Jade Monroe Thriller Series!

"Another nail biter!"
"For fans of murder and suspense this is a must read for you."
"Never a dull moment."
"Do NOT start this book if you only have a few minutes to read!"
"A gripping thriller. Very well written and hard to put down."

Murder happens in Houston, but when the most recent murders take on disturbing similarities, local law enforcement officers fear a serial killer is roaming their streets.
Former sheriff’s department sergeant Jade Monroe has just graduated from the FBI’s serial crimes unit in homicide and is called to Houston with her partner, J.T. Harper, to take on her first assignment—apprehending the person responsible for these gruesome crimes.
With victims piling up and the clock ticking, Jade and J.T. need to intensify their search because there’s no sign the killer is slowing down.
After a late-night epiphany while she’s alone, Jade suddenly comes face to face with the killer, and now Jade is missing. The clock continues to tick—but this time it’s for her.

* All books are standalone stories but since characters carry over, they are best read in chronological order.

Start at the beginning of the Monroe Sisters' world with Maniacal. Find all of the books leading up to the Kate Pierce Crime Thriller Series listed in order below.

Note: The Jade Monroe FBI Thriller books follow on the heels of the conclusion of Exposed, Book 5, in the Detective Jade Monroe Crime Thriller Series.

Note: The Amber Monroe Crime Thriller books follow on the heels of the conclusion of Malice, Book 5, in the Agent Jade Monroe FBI Thriller Series.

Editorial Review:
“In this first installment of Sutter’s new series, heroine Jade Monroe has just completed FBI training and is assigned to help track down a serial killer in the Houston area. As bodies accumulate, the agents learn that each victim’s death involved a cement block, and their job is to figure out why. The smart, risk-taking heroine that readers came to admire in Sutter’s previous Jade Monroe novels is back and in rare form, and the stakes have never been higher, especially when Jade makes a rash decision that threatens to end her FBI career when it’s barely begun. The action never slows down in this book, a wild romp of a thriller that Sutter fans will find deeply satisfying.” Angela M., Editor, Red Adept Editing