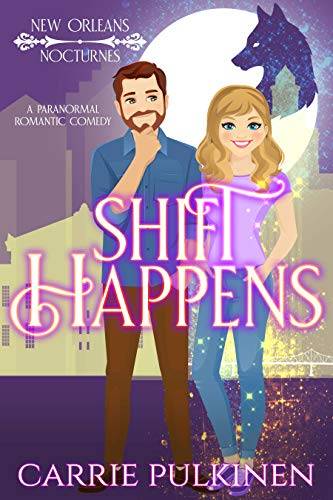 She wants to bang a werewolf, not become one.

Sophie Burroughs is determined to be a witch. Her grandmother was a witch. All the other supes say she smells like a witch, but she can’t cast a spell to save her life.

Sprouting fur is so not on her to-do list.

But when a smokin' hot werewolf bites her and then accuses her of crimes against his pack, she has until the next full moon to prove him wrong and stop his magic from transforming her into a wolf.

A romp in the sack would be a nice bonus, too.

Trace Thibodeaux didn’t mean to bite Sophie. The red wolves have been cursed, she's the prime suspect, and if he wants to keep his rank in the pack, he has to end her magic by any means necessary.

But that doesn’t include sheathing his sword in a witch’s scabbard.

He’s gotten into bed with the enemy before, and that’s a mistake he’ll never make again.

If you like funny heroines and smoldering shifters, you'll love this fast, steamy romantic comedy.

Better Than the First

Shift Happens is the second book in the New Orleans Nocturnes series. Shift Happens is a standalone but if you want to know more about Jane (Sophie's vampire best friend) then read the first book (Licensed to Bite) too. I enjoyed Shift Happens better than the first book. Trace's best friend and pack-mate is missing and Sophie is the main suspect. I figured out who the culprit was relatively quickly but the where the friend was I completely missed. And I giggled when Trace called Sophie out for missing it as well. Loved the snark and emotion and giggles.

I received this audiobook for free from Audiobooks Unleashed. This is my honest and voluntary review.

What a cute funny and interesting story. Really surprised at how it ends but looking forward to reading the next book in the series because I have to know what happens next. Highly recommend reading.

5 stars till the ending

I loved the book and would have given it 5 stars. Although the ending is sorta HEA, I did not like nor agree with the direction of the ending the author chose.....so 4 stars

Oh I’ve loved all of Carrie Pulkinen’s stories because they are always just so much fun to read! Shift Happens is definitely a hoot to read and now I’ve listened to this audible version and thought Hollie Jackson did a fantastic job with her theatrics and voices bringing these spunky fun characters to life! I absolutely loved all of these characters all their quirky ways! This is a very enjoyable and entertaining laugh out loud book and audiobook that I recommend to anyone that loves a fun paranormal story whether reading or listening! NOW I can hardly wait to get my hands on the next in the New Orleans Nocturnes!

I enjoyed this book even more than the first one. I read both books in the same day. I could not put it down. I have bought the rest of the books in the series and can't wait to read them. I highly recommend this series.

This story had everything, friendship, New love, a changed attitude and sex. Friendship between a vampire, a witch and a werewolf made sense in this story. I was not disappointed.

I’m really liking this series. I love all the characters. The stories are well written. I loved the banter between Trace and Sophie, and there chemistry was off the charts. Look forward to reading the rest of the series.

The Art Of Critical Thinking: How To Build The Sharpest Reasoning Possible For Yourself