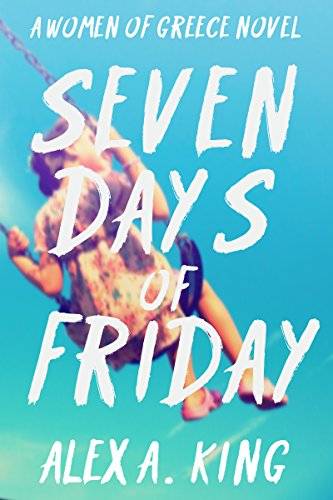 Out now: The Last of June, Book 8 in the Women of Greece series!

Seven Days of Friday opens with Days of the Week underwear and closes with a forty-year-old secret that refuses to stay submerged.

Thirty-four-year-old Vivi Tyler is living her nightmare: gay husband, self-harming teenager, melodramatic mother. They're picking apart her sanity, one stitch at a time. She's crawling along rock bottom when the arrival of a mysterious package opens a new door to a new country.

A desperate Vivi dives headfirst into the quicksand that is Greece--her parents' birthplace. But it's a paradise far from perfect, and instead of the new beginning she covets, Vivi discovers trouble is determined to keep her in its pocket. Soon she's fighting for her daughter's life in a Greek hospital, clashing with her Greek relatives, and cobbling together an inadequate cage around her heart, lest she fall for an unavailable man.


Book One: Seven Days of Friday (FREE)
Book Two: One and Only Sunday
Book Three: Freedom the Impossible
Book Four: Light is the Shadow