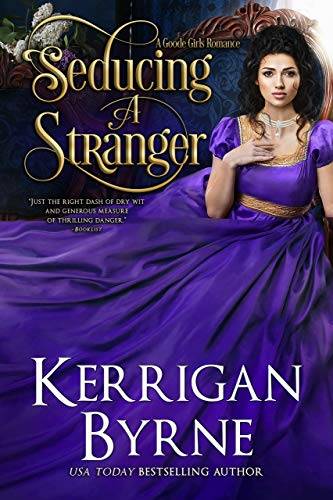 This Knight of the Crown is driven by a painful past and a patient fury… and his entire life is a lie.Sir Carlton Morley is famously possessed of extraordinary will, singular focus, and a merciless sense of justice. As a man, he secured his fortune and his preeminence as Scotland Yard’s ruthless Chief Inspector. As a decorated soldier, he was legend for his unflinching trigger finger, his precision in battle, and his imperturbable strength. But as a boy, he was someone else. A twin, a thief, and a murderer, until tragedy reshaped him.Now he stalks the night, in search of redemption and retribution, vowing to never give into temptation, as it’s just another form of weakness.Until temptation lands—quite literally—in his lap, taking the form of Prudence Goode.Prim and proper Pru is expected to live a life of drudgery, but before she succumbs to her fate, she craves just one night of desire. On the night she searches for it, she stumbles upon a man made of shadows, muscle and wrath… And decides he is the one.When their firestorm of passion burns out of control, Morley discovers, too late, that he was right. The tempting woman has become his weakness.A weakness his enemies can use against him.
"I loved everything about this book!" — Curlyhairlass"5-Star read for me!" — M.nguyen"This book had me hooked from page one and every page after just had me falling more and more in love with my already favorite character of the series." — Allison Smith"If you’re a Victorian Rebels fan, you’ll be thrilled with Morley’s spellbinding story of passion, betrayal, intrigue, and adventure. And if you’re new to this author or series, you are in for the ride of your life." — Love at 1st read"This is a book you need to own and savor and spend time with again and again." — BDay"A Dark and Stormy Knight is PERFECTION in its masterful writing!!! — GI’s Spot Reviews
Please Note: This book was originally published as A Dark and Stormy Knight
Read the Goode Girls in Order

I could have enjoyed this book if the foul language and sex were not in it. I skipped so many pages because of that. Very sad you think having those things in Your books will sell more. I won’t ever read another book written by you.

I love how KB weaves tales of the gentry and the underclass together seamlessly. I feel like I'm watching a Dateline special every time I read one of her books. Seducing a Stranger is no different. I really enjoyed the whodunit and I was satisfied with the ending. I also liked the side characters and j wish I knew more about them. Not having read her Victorian Rebels series, I was unfamiliar with so.e if the references but it didn't detract from my enjoyment. The only drawback was the heroine. I was not a fan of Prudence at all. I feel like she never fully appreciated everything that Morely did for her and she didn't claim responsibility for the situation she was in. Hopefully the other sisters are less insufferable.

It was a good book and a quick read. I love all of the other characters mentioned in the book. I don't think I'd read it again though.

This is the 3rd Kerrigan Byrne I've read and she is quickly becoming a favorite. I love seeing favorites from her other books pop up here. A good stand alone but probably more enjoyable if you have read the others.
This story was a good mix of mystery, romance, and some comedy. I highly enjoyed it.

Love reading Byrne Kerrigan book! Couldn't wait for Morley to find love, after Farrah! Really glad he got his own book.

Seducing a Reader is more like it. Who doesn’t wish for a lifetime of passion, but for Pru she’d take just one night of thats all she’d ever get being married off to scoundrel with several mistress and bastard children. For Morley he never imagined finding a seductive debutant willing looking for debauchery while trying to find a murderer.
One night of passion and Morley never imagined he’d see Prudence again until she becomes one of his murder suspects and has a secret that she has been carrying. Together they try to unravel the secrets and learn to trust one another.

This book was one of those stories that you cannot quit reading until you finnish. It was full of excitement and intrigue and romance.

Another winner by this author. I can't get enough of these strong, passionate broken heros Bryrne writes. Chief Carl is by far my favorite. The man would drive a woman to drink with his stubbornness but his thoughtfulness and protective nature melts the heart. Prudence is also a formidable character and perfect for our hero. Her gentle strength and consistent presence in his life forces him to learn to trust and love again. Perfect.

Dirty Like Us: A Dirty Rockstar Romance (Dirty, Book 0.5)