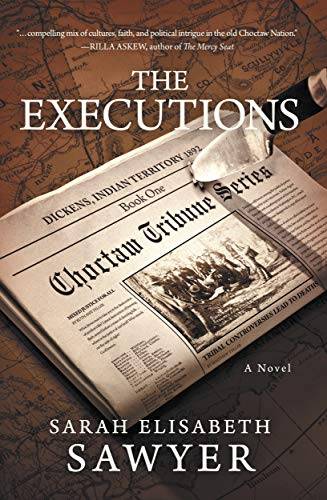 From an award-winning author and Choctaw storyteller comes a riveting tale set in turn-of-the-century Indian Territory.

Who would show up for their own execution?

In a small but booming pre-statehood town, Ruth Ann’s mixed blood family owns a controversial newspaper, the Choctaw Tribune, infamous for its dedication to unbiased truth. Ruth Ann wants to help spread the word about critical issues, but there is danger for a female reporter on all fronts—socially, politically, even physically.

But is the truth worth dying for? When this quest leads Ruth Ann and her brother Matthew, the stubborn editor of the fledgling Choctaw Tribune, to the farm of a condemned murderer, it also brings them to head on clashes with leading townsmen who want their reports about what really happened silenced no matter what.

With the execution fast approaching, truth itself is on the line. When the dust has settled, who will survive to know the truth? And can the truth itself survive when all else is lost?

The Executions is a story of friendship, faith, and family in a gritty western setting with characters that fight for truth against all odds.

“Among the many pleasures of Sarah Elisabeth’s writing are her attention to character, language, and period detail. In The Executions, a story grounded in history and the complexities of pre-statehood Oklahoma, she brings to life, with great heart, the compelling mix of cultures, faith, and political intrigue in the old Choctaw Nation. An intriguing read.”—Rilla Askew, author of The Mercy Seat

About the Choctaw Tribune series:

The Choctaw Tribune series lets you explore the old Choctaw Nation with Matthew and Ruth Ann Teller, a Choctaw brother and sister pair who own a newspaper called the Choctaw Tribune. They're in the midst of shootouts and tribal upheavals with the coming Dawes Commission in the 1890s. These changes in Indian Territory threaten everything they've known and force them to decide if they are going to take a stand for truth, even in the face of death.

A historical fiction series with a Western flair, the Choctaw Tribune series explores racial, political, spiritual, and social issues in the old Choctaw Nation—and beyond.

Be My Cowboy: An Alpha Cowboy and Curvy City Girl

An Immoral Dilemma for the Scandalous Lady: A Steamy Historical Regency Romance Novel