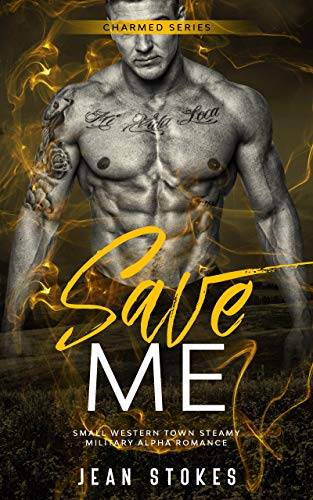 ♥She is new in town...He is an angry discharged veteran...They hate each other but can they work together?♥⚠WARNING: The Charmed Series is addictive! Be prepared to stay up until 3am reading about steamy passion in a small Western town, a tight-knit group of smokin' hot protective military alphas and their feisty heroines!⚠Autumn moved to Charmed, Kansas with her best friend to get away from her failing career and terrible ex-fiancé.While she loves the town, there is one person she can’t stand: Luke Hampton. The two got off on the wrong foot, and now Autumn is tasked to work with the very man she hates.But does she really want to get to know another man after her disastrous ex-boyfriend ruined her world?Luke never really thought he’d return to Charmed, as he always imagined his career in the military would continue to keep him overseas. But then, a terrible attack left him wounded and with a broken leg… and honorably discharged.Now he’s working to get his leg and his body back to how they used to be. But that’s easier said than done, and his lack of a future appear in angry outbursts targeted at whoever’s near him.♥But then, there’s Autumn…can she save him despite hating him?♥Reviews★★★★★ "Autumn works for the Charmed Gazette her friends newspaper and is asked to do a profile on returned Vet, Luke. They hate each other with a passion, so it makes it difficult to start with.
There is drama and so much tension in this book, especially till they start to like each other eventually. So well written, the characters were so likeable, broken and had big issues but definitely likeable, especially Luke. I enjoyed the supporting characters also, which helped to move the story along. Such a great book!"★★★★★ "Luke is a vet that is back home after being honorably discharged... he's a proud and strong man who has a hard time accepting help (and whose wounds and insecurities run a little more than skin deep). Atumn is a city girl that finds her new home in the small town after a broken heart. Shes's smart, strong, and independent. They hated each other from the moment they met. When they're thrown together for an interview they are forced to truly try to get to know each other. I loved their chemistry... they're both passionate and strong. Even when they were bickering, their interactions were full of so much more. They have a connection that's both sweet and pasionate. This is an incredibly well developed story with a great flow and hard to put down. I had to finish it in one sitting!"★★★★★ "I was really glad that Autumn pushed him until he would talk to her even though he was trying to push her away. It did not take long for these two to come around and realize they couldn't live without the other. I highly recommend Jean Stokes and her alpha male series! Excited to see who Dean gets with in the third book."
Author NoteThis is the Charmed story of Autumn and Luke, two lost souls trying to understand what their futures hold. A perfect read for those who adore steamy enemies to lovers style romances, with a dashing military hero damaged by his past and a strong willed woman determined to help him see the light.There is no cliffhanger and it can be read standalone but is recommended to read along with the rest of the Charmed series. Trust me — you’ll fall in love with this small town and its residents!Steam & language alert 18+ only: I don't want your angry vigilante mama after me! If you aren’t eighteen then go read Harry Potter, mind your language and eat your broccoli!What are you waiting for? Start reading and escape reality for a bit!
Be sure to look at Jean's Amazon author page to see all her books!
Romantic Comedy Western Romance Military Romance

Luke may have a pretty face, but that's all he has going for him. Autumn can't remember what exactly he said to her on their first meeting, but she's never met a more terrible and condescending person in her life!

When her best friend, Makayla, decided to return to her hometown and take over the newspaper from her father Autumn decided to move with her. She wasn't happy in her public relations job and the man she thought she would marry turned out to be cheating ba$tard.

Now, Makayla wants her to interview Luke for the paper! She didn't care that he was a hero, she didn't want to do it!!!

I loved this book! Wow, do the sparks fly between Luke and Autumn. Everything out of Luke's mouth seems to piss Autumn off. It's doesn't help that Luke seems to get a kick out of it. This is the second book in the Charmed series. I love this small town and all its residents. I love Autumn's feistiness. Luke is just plain sexy.

I highly recommend this book. It is well written and you can feel Luke's frustration trying to heal and get back into society after being injured in the service. Although it can be read as a standalone I love that the mystery continues in the storyline giving the series cohesiveness besides the relationships that bind them together. I will definitely be reading more Jean Stokes' novels.

This is Autumn and Luke's love story

She came to Charming to help her friend run the newspaper, and escape from a failed relationship where her fiance was cheating on her and had her believing it was all her fault he cheated, Luke is a war hero that is trying to recover from a leg injury that saw him lose his career.

Autumn moves to Charmed, after her stinking boyfriend and her unfortunate career. Her friend Makayla from Reignited Love, lives in Charmed so Autumn goes there. Autumn is a great character and I really liked her. Luke is an injured war hero, and has some injuries that need to heal. His body and his spirit need to heal. Makayla sends Autumn to interview Luke and they seem to be enemies from the start, but there is that fine line between love and hate. I thought Jean Stokes presented their relationship in a believable way. My interest was kept and really enjoyed the story.

Another good story by this talented author. I have enjoyed reading her other stories and I look forward to reading more.

I've read several books written by Jean Stokes; she is becoming one of my favorite authors. I can’t wait to read more of her books.

This is the second book in the Charmed Series; she has written another great book. I loved the story of Autumn & Luke.

I received a free copy of this book via booksprout and I’m voluntarily leaving a review.

Luke is home from the service, but still needs physical therapy for his leg after a bullet hit him. Autumn is the woman who crosses his path as the newspaper wants a profile on him for an edition. At first they hate each other, but the second interview starts to open them both up. The trust and acceptance is hard to come by and the romance is slow and building. Loved how deeply they learned about each other and were there to turn the stress and self-hurting feelings around. Not good to dwell on the negative so much. Nice to see that all their hopes were starting to come true by the ending. Well done.

This author did not disappoint. This novel reached out and grabbed me from the very first page and did not let go until the very last.

i am not sure if I should laugh or scowl at Luke. he is a hardenend military man and now that his life has been altered in so many ways his lack of civility is getting him a bad reputation. At this point he may not care. Then there is the beatiful Autumn she happened to be in the vicinity when one of his temper tantrums took hold. Now the one person who may be able to help him hates him. What is a harderend Military Man to do

The Bible's Uniqueness: An Introduction to Scripture