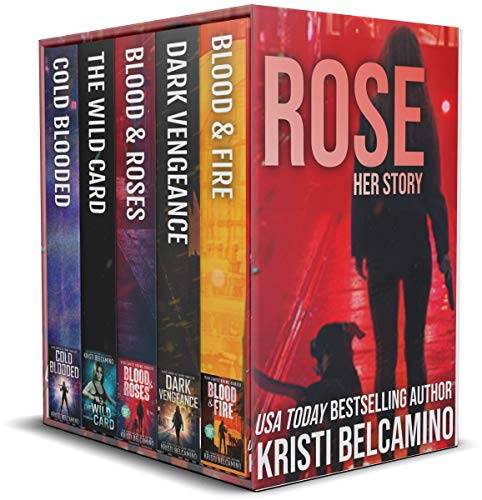 Catching up with Rose

At first glance, it might appear that Rose’s path is a convoluted one, weaving through several books and several series.
In fact, what happened is when I finish a book, I often write a book in a different one of my three main series: The Vigilante Crime series (featuring Rose); The Gia Santella Crime Thriller series (Featuring Gia) and the Queen of Spades series (Featuring Gia’s aunt, Eva Santella).
Because all the characters and worlds are intertwined, we will go from following Rose in one series to following her in another one.
For those readers who haven’t read my books in the order they are published (as I said something skipping from one series to another), this should help clear it up:

We first meet Rose, then known as Rosalie, in Book 6 of the Gia Santella crime series, Border Line.
In that book, Rosalie, who grew up in Guatemala, has just come to America. She was brought over by a smuggler, called a Coyote, who ended up being a rapist and murderer.
Gia rescues Rosalie, taking her in to protect her.
We follow Gia and Rosalie through the next four Gia Santella crime thrillers.
Soon after Rosalie comes into Gia’s life, the vigilante can’t imagine life without the eight-year-old girl.
When Rose’s father, Nico Morales, the head of the world’s biggest drug cartel, tries to get his daughter back, Gia vows she will die before she gives Rose to him.
But Nico proves that he wants his daughter back because he loves her more than life itself. Along the way, Gia begins to believe Nico and the two fall in love.
Nico gives up the life of a drug lord to be a father to Rose and partner to Gia.
They raise Rose together. In Gia Santella Book 10, Cold Blooded, Rosalie has a larger role than in the previous books. The book ends with her being sent to train as an assassin in Italy with Gia’s aunt, Eva Santella.
The next time we see Rosalie is in The Wild Card, Book Six of the Queen of Spades series (featuring Eva Santella). This book is primarily Rosalie’s story. She is now a trained assassin called Rose.
In The Wild Card, Rose faces the Sultan, an evil cult leader who has powers beyond the physical world. The book ends with Rose uncertain whether she wants to continue life as an assassin.
Rose next appears in the first book in her own series, Blood & Roses.
The next time we hear from Rose is in Dark Vengeance, Book 12 of the Gia Santella series. But Rose is off screen. Instead, we are with Gia as she travels to Indonesia to find Rose and give her important news.
Then in Blood & Fire, Book 2 in Rose’s own series, we see Rose’s point of view during Gia’s search for her in Indonesia. And then follow Rose to Australia where she confronts another deadly enemy in her ongoing hunt for the Sultan.
Blood & Bone, Book 3 in the Rose series, has her confronting a ruthless serial killer in Florida.
There are at least three more books featuring Rose, maybe more.
I hope this helps you follow her journey.
To make things a little easier, I’ve packaged the more recent books in one boxset called Rose.
This boxset contains Cold Blooded, The Wild Card, Blood & Roses, Dark Vengeance and Blood & Fire.

Since I Fell For You (New York Sullivans)