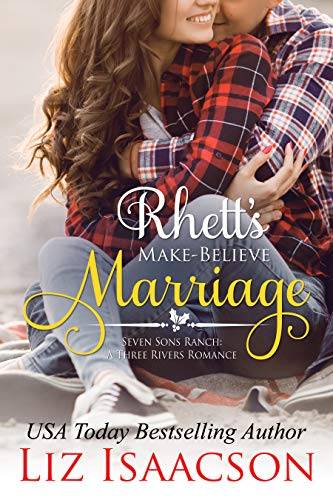 To save her business, she'll have to risk her heart. Will their fake marriage take them out of the friend zone?

"Readers looking for a clean Christian book with mature but handsome cowboy billionaires and the women who love them, will find heaps to enjoy starting with this book. A binge-worthy read." ~InD'Tale Magazine

Rhett Walker has been in Three Rivers for a year, relying on the Foster sisters next door as he rebuilds his ranch after a tornado hits town. He's closest to Evelyn, and they spend a lot of time together. While he's entertained thoughts of starting a relationship with her, there's always a boyfriend and their friendship between them.

Evelyn Foster runs a successful, secretive matchmaking service for the women of Three Rivers. She helps set up situations so cowboys can get out of their own way and see the beautiful woman standing right in front of them. Business is great—until people start to lose confidence in her abilities because her boyfriends all seem to break up with her.

To save her business, she'll have to risk her heart. And her pride. She knocks on Rhett's door—the only person she thinks will go along with her crazy plan. Could their make-believe marriage be exactly what they both need to get out of their own way and find a happily-ever-after?
Dating, Relationships & Spirituality Inspirational Religious Fiction Inspirational Spiritual Fiction

Would have read this book. I only had a snippet unit sounded good. Nice for you and yours and my buddy

This was one of her best books
I hope the rest of the. Series is as enjoyable and easy reading

Evelyn is living at the Silver Star ranch with her two sisters, Callie the oldest and Simone the youngest since their father retired and moved in with his mother in town at Three Rivers. She's trying to run a matchmaking business where the women tell her who they are interested in and help them meet the Cowboy and maybe one she thinks is better suited without the Cowboy knowing so he can get out of his own way to find happiness! Then Rhett Walker and his brothers come to town and buy the ranch next to theirs, Fox Hill. Their first encounter with Rhett is taking refuge in his storm cellar in the middle of a tornado! Evelyn is smitten as is Rhett or so it would seem. Only they can't seem to get past the friend stage. It's been 14 months since Rhett came to town and four of his six other brothers are now there also. They have renamed their ranch to Seven Brothers which is a much better name for them! Only Evelyn's business is failing and Callie makes a suggestion, why not get married? Even if it's only fake? So she takes the idea to her bestfriend, Rhett and he agrees!? What happens next? You will want to read this great story by Liz Isaacson to find out. It's not at all what either of them expected!