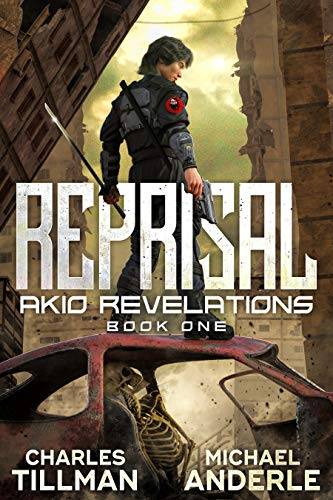 Ancient Warrior—Vampire—Queen’s Bitch...Akio accepted his Queen’s charge to stay behind and protect humanity from the Forsaken scourge.She never said it would be easy.An isolated police report about an island overtaken by feral, red-eyed creatures savaging humans spurs Akio to investigate. The local police are good at their job, but they’re not well-equipped to handle things that go bump in the night.Especially not the ones terrorizing this once-peaceful island paradise.While dealing with the incursion, Akio discovers new information. The situation is escalating—and all evidence points to enemies from his past.A dangerous science he’d thought was destroyed.The Forsaken are rising to take their place as the alpha predators.Now, it’s a race against overwhelming odds as Akio unravels long-laid complex plans and takes the fight to those who threaten the last bastion of civilization on post-apocalyptic Earth.Can he stop this evil before it enslaves humanity?Or will the Forsaken succeed in taking over the world?
Go up and click 'READ FOR FREE' or 'BUY NOW' and find out if Akio, Yuko and Eve accomplish this task for their Queen, or die trying.

But clearly his first work. I feel like the characters have great potential; I will read #2 (at least) and see if we can get to some of that potential and if the narrative becomes more compelling. I am hopeful, because he very much shows promise as a writer.

Excellent series and I recommend the books as well worth the money and time f or relaxing break from life and worries.

Very well written book, that is true to the original characters. The plot is well developed and develops Eve in an interesting way.

While I enjoy the interplay between Akio and Yukio, along with the glimpse of humor that isn't shown elsewhere. I found the ease that Eve's able to instantly come up with technology was a little bit much. I still love the background story though so kudos to all!

Better late than never - to have read this series

I am binge-reading this series as I cannot believe I managed to allow this series to slip past me. I have loved Akio, Yuko, and Eve since being introduced to them originally. I teared up when they remained behind on Earth after the "incident" (I'm not spoiling anything for anyone who has yet to reach that point in the OG series), and bawled happily when ... Dang, hard not to drop spoilers. This is a much-welcomed missing piece of a puzzle that slots into the spin-offs including the Terry Henrey Walton Chronicles, The Boris Chronicles, Reclaiming Honor, (a few more I know I'm missing off the top of my head), and lands pretty darn close to the events of The Second Dark Ages series. As I am already familiar with the characters and their world, it was very much like coming home. The pacing and world-building entranced me as always. For those familiar with the Kurtherian Gambit, this is a must-be-read if you were dying to know more about Akio and those who stand beside him.

I've been interested in all the books stemming from the Kurtherian gambit books. Akio is an important character to the series. He has the full trust of Bethany Ann and was given a task vital to the remaining world. I have yet to read any books in the series that disappointed me.

Charles, you did an amazing job with Akio!

I loved finding out that he was a former Prince, and that he has always been honorable. And watching Eve become aware was Awesome!

Steal the Demon: A Science-Fiction Novella

Take It Off the Menu: A hilarious, accidentally married rom com!