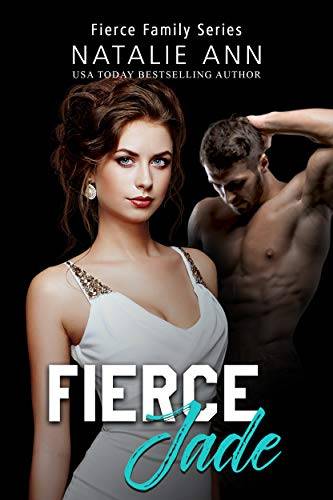 Jade Fierce thought she had it all. Many looked at her and assumed the same thing. She’s been misunderstood her whole life and was just sick of it. With all her brothers sliding into love around her, the dreams she’s had of wanting the same were suffocating her. But the last thing she plans on having done is her parents setting her up!

Brock James’s life changed forever the day a bomb exploded leaving him injured. With his military career over, he sets his sights on a new adventure. This one needing some help from none other than the sexy engineer he was partnered with at his best friend’s wedding the previous year. Only now he is worried she’s going to find out her parents might have had a hand in it and want nothing to do with him.

Absolutely loved Jade and Brock's love story! Perfectly matched by her family, Jade finds what she has been looking for with Brock. Brock has to deal with his mother who is having a hard time of it

This is an honest love story of two complex people with lots of chemistry.

I received a complimentary copy of this book and am voluntarily leaving an honest review.

This is a sincere love story between two complex people, Brock and Jade.

Brock James was a career military man until he and his team hit an IUD, and he was severely injured. Even though he has recovered, he will never be at peak enough condition to serve again in the military.

Brock has extensive scars that he describes as “red and ugly. He has not been with a woman since he has been injured, and he is unsure how they will react to his scars. He also worries whether he will actually be able to follow through on sex. Another fear is that Brock has no idea if he is able to father children. These fears are forefront when he begins a relationship with Jade.

Brock’s new career is as the head of the security at a hospital where some of the Fierce family work. He also has an idea for an invention that he would like create and use. He shares this idea with his close friend Travis Fierce, Jade’s sister. All of this leads Brock directly to Jade Fierce, who is an engineer in the Fierce family business.

Jade is one of two girls in the Fierce family of brothers and cousins. Even though she has been teased and ordered around by her brothers and cousins for her entire life, the two families are a very close-knit family. As a result, Jade has learned not to cry or show any feelings.

In spite of their complex personalities, Brock and Jade begin an honest relationship. Although they both have insecurities and are slow to fall in love, they never deny their strong chemistry or their feelings for each other. I am happy to say that neither Brock nor Jade stoop to game-playing or pretense to hide their feelings. They always help each other and support each other in everything they do or feel.

I love this passionate love story between Brock and Jade. Their sizzling chemistry is obvious to the reader from the first moment they meet. Yet their passion is always mixed with respect, admiration and love for each other.

I loved this series. Humorous and romantic. Waiting for the final book. Will get as soon as it’s available Jan 2021

I love all the fierce books .
I feel like I know them all.
They all have great personalities
and the love of their family.

I love this series because it makes me feel like part of this huge family! Fun read like all the others. Looking forward to book7!

I loved his story and the series. The storyline is interesting and well written. The storyline ,thoughts and emotions of the characters are clearly depicted. I recommend this book and series to anyone who enjoys a good story of family and finding forever love.

....super annoying. And insecure. And spoiled. And judgmental. I know that everyone can have those traits. But I don’t want to spend my escape time reading about it.

A great story! Two people who have had troubled pasts coming together, against all odds, and finding a relationship that works. As unconventional as the story unfolds iris also a story of two hearts that have waited, and worried, if their. Day wouldever come. A story you will cherish and fall in love with!

steam not worth the irritation

Looking for steamy sex? This is tepid at best. And the sex isn't worth the irritation of the continuous grammatical errors. Spend your time clipping your toenails. mb

Well done. Enjoyed the plot development. Missing words or wrong words in only two or three sentences in the whole story. Premarital sex but not overly descriptive. Highly recommend book.

I have enjoyed several books in this series. Jade is one of the few women in this extended family and her personality has been shaped by dealing with all the older brothers and cousins.