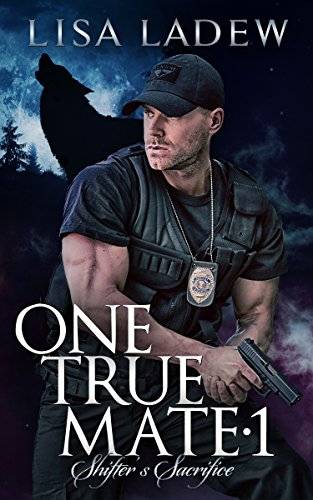 An all wolf-shifter police force has been the only thing between humans and an unknown evil for centuries, but the pack is in danger of dying if they don't find their promised mates soon.

Trevor Burbank is a shifter cop in a world of humans who don't know the evil that wants them dead. If he does his job well, the humans will never need to know, but he feels like he's working against the clock, because his pack is about to die. The females have all been killed, and the half-breeds they make when they mate with humans aren't skilled or strong enough to fight.

Gabriela Carmi has lost everything that means anything to her way too fast and now she feels like she’s losing her mind, too. On a quest to find something that won't reveal itself to her, she feels as if she’s pining for someone who may not exist, so when an evil presence begins to follow her, she isn't sure if her mind is slowly falling apart, or if the impossible is actually coming true. When an instant attraction sparks between her and the dangerously sexy police officer sent to help her, it makes matters worse and better at the same time.

It's a race against time to find the angel/human hybrid One True Mates that the pack's spiritual leaders say truly exist. Saving the shifter clans is on everyone's mind, except for the chosen, the One True Mates, most of whom don’t even know who or what they really are, or why they seem to be slowly losing their minds.

You've NEVER read a shifter romance, or a fated mates romance like this before.

Love love love it!! So at first I thought well this is a lot of explanations in the beginning. But boy did it come in handy later and the pace zoomed!! Nail biter!! On to OTM2!

I like Trevor and his steadfast faithfulness to Ella. It took her a whole story to accept who she was and what she was but when needed she came through. I was confused by her sisters story or lack of it but await shays’s book I guess.

Lisa writes wonderful stories with characters that you want to meet and believe in. These paranormal books are great reading and am looking forward to reading more of Lisa Laden's stories.

Always enjoy sci fi and good endings. Entertaining and look forward to the next book. Following each character's story and life.

Unique storyline, but poor character build. Ella starts off thinking she is crazy and none of her hallucinations, dreams, etc are explained. Got 80% thru it and had more questions than answers and just quit

I wanted to smack her for lying for no reason. Literally she had no reason to lie all the times she did in the beginning. It annoyed the hell out of me and made me lose interest in her.

With this book, I had to read the glossary and first few chapters a couple of times. Once I did, I went on an adventure that took me from heaven to hell and back. I totally love Tro and Trent so much, I wish I could have wolven. Trevor and Ella are such a magnificent couple. Love how Trevor out his life on the line for his love. I love how they save Ella and Trevor. Highly recommended for mature audiences to read.

Was a good read

I enjoyed this book and totally loved the characters. I will read more books back Lisa and can see myself sharing her writings with fellow readers. I did take away one star due to how I felt myself loving the story and world I dove into but finding too much info that made me flip the page cause it wasn't coming at me fast enough. I like to read with almost instant reward. I don't mind a semi slow read or burn but when I feel like its taking forever for the characters to come together I get bored and start skipping some and I hate when I do!
With all that said I really want readers to know this story is so awesome and the world Lisa built will draw you and have wanting to get closer to these wonderful people. You might even be thinking you need one of these in your life..... Just saying!! Lol

I loved this book. Both characters had such nice chemistry. I love it when the main character has a sweet personality. I'm excited to continue through this series and was definitely not disappointed!

This book hit all the things I look for in a book... It caught my attention with the cover & kept my attention throughout the book... Fell asleep while reading cause I couldn't put it down

Very enjoyable read . This read kept my attention from page 1, I am looking forward to continue reading this series.

Imperfect Secrecy: A romance in the tech scene

She's Got the Guns